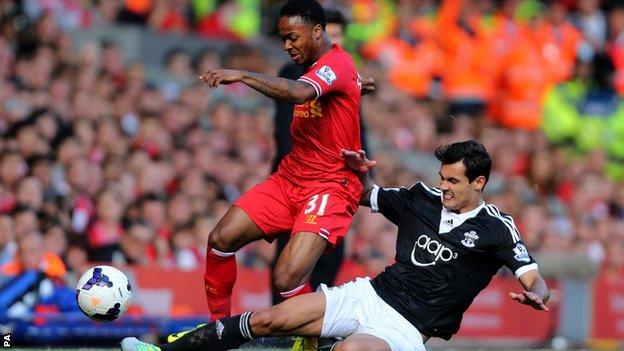 England manager Roy Hodgson says Raheem Sterling's impressive form for Liverpool has put him in contention for a place in his World Cup squad.

The winger, 19, has been a first-team regular for the Reds this season and scored twice in the 5-1 win against Arsenal this month.

[Sterling, Zaha & Johnson] have got it all to play for but at the end of the day I'll have to make a choice. I can't take all of them

His only England appearance to date came against Sweden in November 2012.

But Hodgson said: "Since he got back into the Liverpool team his form seems to be going up and up."

However, he has made 25 appearances so far in 2013-14, scoring six goals, and has played a key role in helping Brendan Rodgers's side stay in contention for a top-four finish in the Premier League.

Hodgson added: "He is doing it for a top team and that puts a lot of pressure on everybody else because if you can do it at the top of the table with Liverpool then you can do it in an England shirt as well."

Sterling is not the only player whose form has impressed Hodgson this season.

Forward Wilfried Zaha, 21, has two England caps, having made his debut in the same game against Sweden as Sterling, before making a substitute appearance in last August's 3-2 friendly victory over Scotland.

The former Crystal Palace man had been unable to force his way into the first team at Manchester United, but is featuring regularly for Cardiff City, who he joined on loan last month.

Meanwhile, Sunderland winger Adam Johnson earned the last of his 12 caps four years ago but a run of six goals in five games for the Black Cats means he could be in contention for a place in Hodgson's squad for this summer's tournament in Brazil.

"Zaha is back in the frame again because he's playing football at Cardiff," Hodgson added.

"Adam Johnson is another contender. These guys have got it all to play for but at the end of the day I'll have to make a choice. I can't take all of them."

Meanwhile, Hodgson said he would not be able to take a full-strength squad to England's pre-World Cup training camp in May if a Premier League team made it to the Champions League final.

Hodgson intends to take his squad to Portugal for a week of warm-weather training from 19-23 May.

The Champions League final takes place on 24 May and Hodgson said: "In many ways I would be happy if an English team got to the final. All it would mean is that those players involved would join us later."

England, who open their World Cup Group D campaign against Italy on 14 June, next play a friendly against Denmark on 5 March.