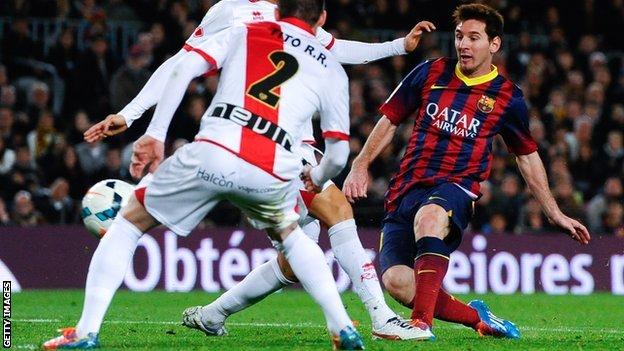 Lionel Messi can "break any record he sets his mind to", according to Barcelona boss Gerardo Martino after the Argentina forward became the third highest goalscorer in La Liga history.

"He'll lose count [of the records he breaks]," Martino told the Barcelona website.

"Barca enjoy him and Argentina does."

He now needs only six more goals to overhaul Raul's 71 to become the all-time record goal scorer in the Champions League.

And, ahead of Tuesday's Champions League last 16 trip to Manchester City, Martino believes Messi can still improve despite scoring five goals in his last three matches.

"We're on form coming into the match against City, this is the perfect moment to try to qualify for the quarter-finals. Most of the players are playing really well."