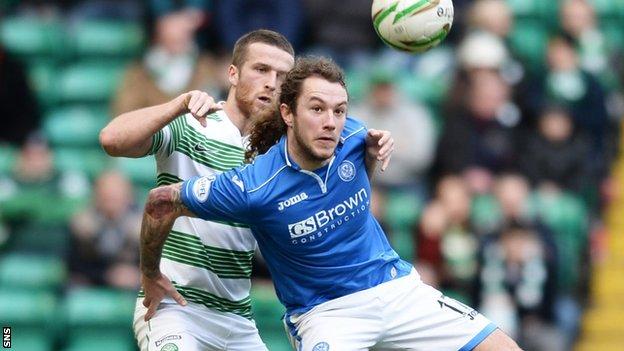 A top-six Scottish Premiership finish and progress in the Scottish Cup remain Tommy Wright's targets after St Johnstone lost to Celtic in the league.

"Our season won't be judged on this result," said the Saints manager after on Sunday.

"We have a lot of big games coming up and I'm sure we'll bounce back.

"They looked a really good side. There are things that we could have done better in the game but it is always difficult coming here."

St Johnstone have a Scottish Cup quarter-final at Raith Rovers to look forward too, though the Northern Irishman would prefer to focus on the trio of league games to come before that tie.

We didn't create a lot of chances but I'm not going to be too hard on my players, we've been excellent all season

They have home matches against Inverness and Motherwell before an away trip to second-place Aberdeen before they are on Cup duty again, on 8 March.

"We are a point ahead of Hibs and we have a game in hand and we've still got to play Hibs," said Wright, whose team lie sixth in the table.

"We've got three league games before the Cup game and we need to pick up points and move away from Hibs and close that gap on Inverness and Dundee United.

Reflecting on the match at Celtic, Wright conceded his team had been beaten by the better side on the day.

He told BBC Radio Scotland: "We didn't keep the ball as well as we should have and that contributed to us having to spend long spells of the game defending.

"I think we started the game OK but the first goal is probably a bit similar to the one [Virgil] Van Dijk got at McDiarmid.

"He gets the freedom of the park to step in almost to the last third. We dropped a bit deep and it's a good finish.

"It's easy to pick holes in what we didn't do today but I thought Celtic were excellent and they passed it really well and kept us under pressure without creating loads of chances.

"We didn't create a lot of chances but I'm not going to be too hard on my players, we've been excellent all season.

"It was just a frustrating day for Stevie [May]. If you drop too deep and then you do win the ball, if you don't keep it you can't get it up the pitch.

"The pitch here is so big and you get big switches of play and the full-backs get a lot of the ball.

"We didn't move it from the centre to wide areas quick enough and we ended up turning it over quite easily a lot of times."