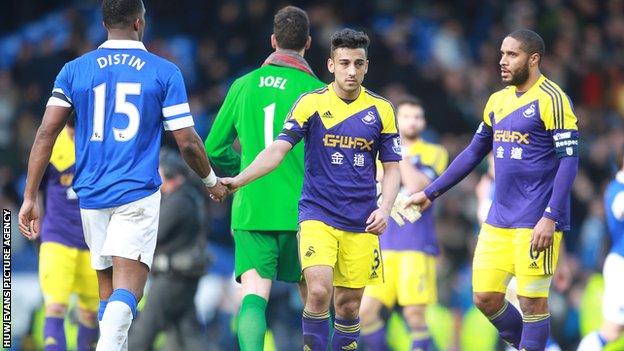 Garry Monk says individual mistakes proved costly as Swansea City were knocked out of the FA Cup by Everton.

Jonathan de Guzman had cancelled out Lacina Traore's early opener before Everton regained control in the second half.

"We were well in it and a couple of mistakes cost us," Monk said.

"It's just frustrating that we couldn't have stayed in it a bit longer in terms of not making those sorts of errors.

"Obviously [there were] a couple of individual errors, but honest mistakes like Neil made - I can live with that.

"Like I said to him in the changing room 'it won't probably be the last time you make that sort of mistake in a game'.

For the future I think it looks good. Going forward I think it bodes well they're willing to learn and take it on

"But it's important he learns from it. I've done it myself and I think every player has.

"We were doing so well in the game up to the hour mark and really competing, especially in the first half.

"Apart from a couple of errors I can be pleased with the work they did."

Monk defended his decision to make eight changes, with a Europa League tie against Napoli in midweek.

"When you have got seven games in 21 days it is impossible to play the same 11 in every game," he said.

"I can only judge the boys on the week I have had and their attitude has been magnificent, every one.

"From the first day I said everyone would play and I was true to my word.

"It is a squad game. Everyone seems to be amazed when there are rotations.

"With Europe you have to have that rotation. Every side I pick is a team to try and win the game."

Defeat at Goodison Park was the first loss of Monk's fledgling managerial career following a win and a draw in his previous two games.

Monk, who was placed in charge for the "foreseeable future" following Michael Laudrup's sacking, has been pleased with the response of his players since taking the helm.

"For the future I think it looks good. Going forward I think it bodes well they're willing to learn and take it on," Monk added.

"I think effort-wise and the application from the players, we've only been with them for a week and they're trying to take on new ideas

"I'm pretty amazed with the week and how much they've taken on board.

"If we can get to a position where you get a longer period to work with them then you can really implement some ideas, a way of playing and an attitude that can do well for the club."

Monk and Swansea now turn their attention to the Europa League Round-of-32, first-leg tie against Napoli at Liberty Stadium on Thursday.

"It's in front of our fans at a packed Liberty and something for everyone to look forward to," Monk said.

"I just have to make sure, within the next couple of days, I can prepare the team properly to go out there and win that game."