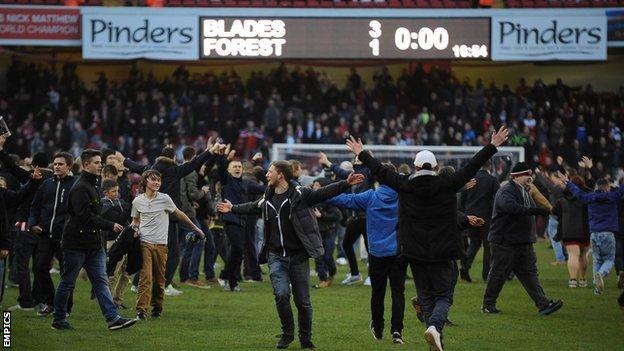 Sheffield United boss Nigel Clough said his side's FA Cup fifth-round win over Nottingham Forest was inspired by the half-time revelation they could face Sheffield Wednesday in the next round.

The Blades will face Wednesday at home if the Owls can beat Charlton in their postponed last-16 tie.

"Just before we went out for the second half, it came through," Clough said.

"We ummed and aahed for a few seconds and then thought 'what the hell, we'll tell them'."

The League One side continued their superb run in the competition by coming from a goal down to beat Championship side Forest 3-1 in front of a crowd of 25,118.

Clough added: "A few of them didn't believe us, and we just had a laugh with them at the end saying we were joking and it was Brighton or Hull away.

"We had to come back and win our match, but it was another incentive for the players."

Clough's side are in the relegation zone of the third tier and are the lowest-ranked team to reach the FA Cup quarter-finals since Cambridge United in 1990.

They went behind to Jamie Paterson's header but Conor Coady equalised before substitute Chris Porter scored twice in stoppage time.

The result, in front of United's biggest crowd of the season, ended a 16-game unbeaten run for Forest boss Billy Davies, who had "no issue" with the draw being made during the game.

Clough, who has never won the FA Cup, said beating a team he represented as a player, and a manager he fell out with while Derby boss did not add to his satisfaction.

And he was disappointed by pitch invasions following Porter's second goal and after the final whistle.

Fans spilled onto the pitch in celebration and police had to restore order after some made their way to the Forest end. Clough and Davies said none of their players had been affected.

Clough added: "The only downside was fans coming onto the pitch. You can understand exuberance but just try and stay off the pitch."

United are now 90 minutes from their first semi-final at Wembley since they lost to Sheffield Wednesday in 1993. They also reached the FA Cup semi-finals in 1998 and 2004, though both games were played at Old Trafford.

But they face a battle to remain in League One, and Clough said his focus would now return to staying up.

"We forget about the FA Cup now, it's brilliant there is a few more quid in the coffers but the next three league games against Gillingham, Bristol City and Colchester are far more important," Clough said. "They will take priority over everything.

"The atmosphere was special today, 25,000 in Bramall Lane - I don't know when that last happened - but we won't get that in League Two if we don't get out of the bottom four."