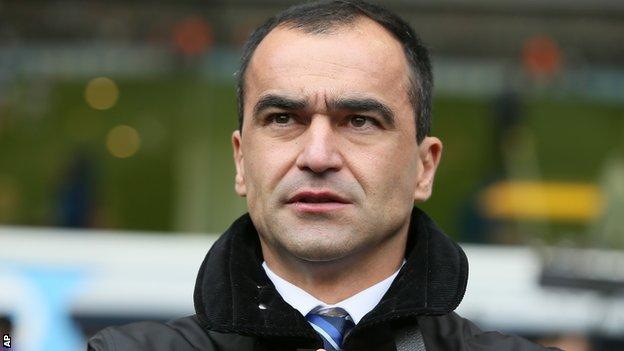 Martinez said: "The draw you always hope for is a home tie, but it doesn't matter - if you want to win the cup you have to be prepared to face everyone.

"We will have to be at our best but it is something to look forward to."

The Spaniard, Wigan manager when they beat Manchester City in last season's final, added: "If you want to find a word for our performances in the FA Cup this season it would be 'professional'.

"Everyone in our squad is capable of coming on and making a big contribution."

Traore, on loan at Everton from Monaco, looked to have paved the way to a comfortable passage when he scored with a backheel only four minutes into his debut.

Jonathan de Guzman levelled with a header but, after replacing Traore on the hour, Naismith took advantage of Neil Taylor's poor back-pass to put Everton ahead and was then fouled by Ashley Richards in the area, with Baines netting from the penalty spot.

Martinez was pleased with Naismith's impact off the bench, but was also happy with Traore's contribution.

He said: "Steven took a knock and had delayed concussion. He felt fine initially and was then dizzy. He couldn't remember that he scored - so I told him he scored from 40 yards.

"Steven is a gem of a boy. He has an incredible attitude and I'm so pleased he is enjoying his football. He was instinctive and a real threat when he came on.

"It was also good that Lacina Traore got a goal and played for an hour, which was our aim for him."

Everton's trip to Arsenal will take place on the weekend of March 8-9.