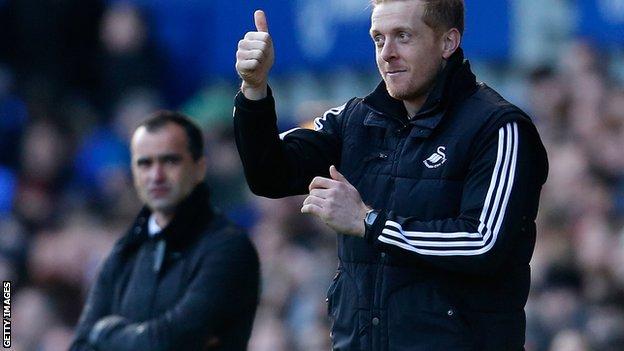 Martinez's side knocked the Swans out of the FA Cup with a 3-1 fifth round win at Goodison Park.

It was Monk's first defeat since taking charge but former team-mate Martinez has seen progress in their last few games.

"I think since Garry Monk has taken over everyone is fired up and everyone has a point to prove," Martinez said.

"I've seen them galvanised in the last two games.

"I saw the games previous to that and probably the West Ham game showed a little bit of a pedestrian performance.

"They're still involved in the Europa League and with 12 games to go in the league I think the future is very, very bright."

Martinez played alongside and later managed Monk during two spells with the Welsh club and had already backed the appointment of the 34-year-old.

But substitute Steven Naismith restored Everton's lead after capitalising on Neil Taylor's backpass before Leighton Baines added a third from the penalty spot.

Martinez's side will face Arsenal in the last eight but the Everton manager praised Swansea's efforts at Goodison Park.

"But you need to give huge credit to the way Swansea played and Garry Monk [showed] a lot of bravery and that allowed it to be an open game."