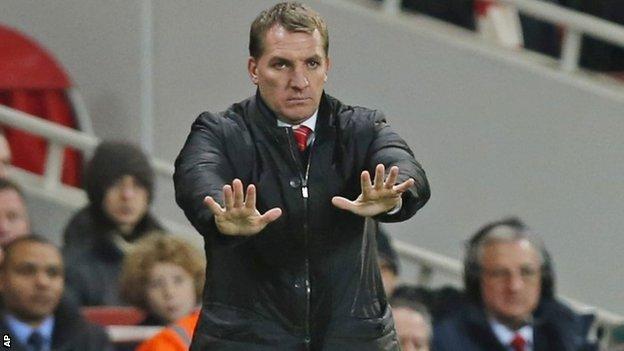 Liverpool boss Brendan Rodgers says it was a "strange decision" by Howard Webb not to award his team a second penalty in their 2-1 FA Cup defeat at Arsenal.

The Reds, who had already scored through Steven Gerrard's spot-kick, felt Luis Suarez was fouled by Arsenal's Alex Oxlade-Chamberlain.

Referee Webb, who was well positioned, ruled it was fair as Arsenal went on to reach the last eight.

"It was probably more clear and blatant than the first penalty," said Rodgers.

"I thought it was quite an easy decision for the ref. Luis has a touch, gets around him and it looks a blatant penalty. It was a strange decision."

Goals from Oxlade-Chamberlain and Lukas Podolski put the home side in command at the Emirates Stadium on Sunday, before Gerrard's calm finish set up a dramatic finale.

Webb awarded the spot-kick after Suarez was clipped by Gunners forward Podolski in the 59th minute.

But the Rotherham official, who will go to this summer's World Cup as England's top official, was unmoved when the Uruguayan tumbled again eight minutes later.

Arsenal boss Arsene Wenger said he was unsure whether the foul should have been given. "I have seen the incident and will have to look again - maybe, maybe not," said the Frenchman.

Liverpool, who thrashed their Premier League title rivals 5-1 at Anfield last weekend, continued to search for an equaliser which would have provided another dramatic twist in an entertaining cup tie.

Arsenal goalkeeper Lukasz Fabianski was inspired as he produced a string of superb saves to deny Suarez, Daniel Sturridge and Philippe Coutinho.

"We probably should have been 2-0 up inside those first six or seven minutes. Going forward we were outstanding. I'm disappointed with the goals, the first one in particular was just a long ball into the box.

"But, apart from that, going forward we were a real a threat and are bitterly disappointed not to get something."

The Reds, who have not won the title since 1989-90, are fourth in the top flight and trail leaders Chelsea by four points.

"Now we have got one competition to focus on for the rest of the season and have to really focus on these last 12 league games," added the Northern Irishman.