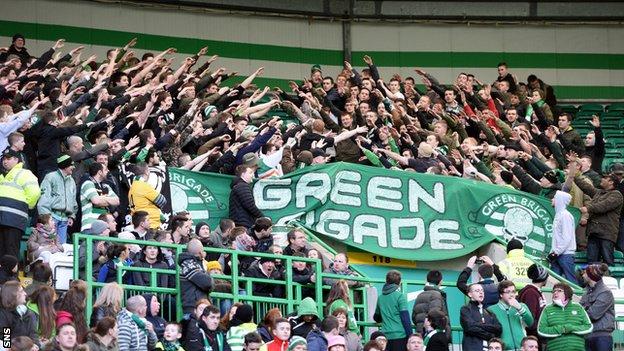 Neil Lennon has welcomed the return of the Green Brigade to Celtic Park.

The "ultras" group have been absent since Celtic were fined £42,000 by Uefa for "illicit" banners displayed during a Champions League match in November.

The group, dispersed from section 111, gathered in a different part of Celtic Park for the win over St Johnstone.

"I can't thank them enough because they made a hell of a difference to the atmosphere today. The players would've thrived on it," said Lennon.

On Sunday, about 250 fans, including two drummers with a Green Brigade flag, congregated in section 118 for the win over St Johnstone.

"Whoever they were - I don't know if they were the official Green Brigade or not - I can't thank them enough because they made a hell of a difference to the atmosphere today," said Lennon.

"I got word this week that they might be in and I was delighted to hear that noise. You tell even just by the rhythm of the game that they added to it.

"So long as everyone works within the rules of the club then we welcome that colour, energy and noise.

"It's been part of my time here for the last three-and-a-half years and we don't want to miss that because they brought a lot of good to the ground."

When asked about the group's return, a Celtic spokeswoman said: "They were not banned and they bought individual match tickets."