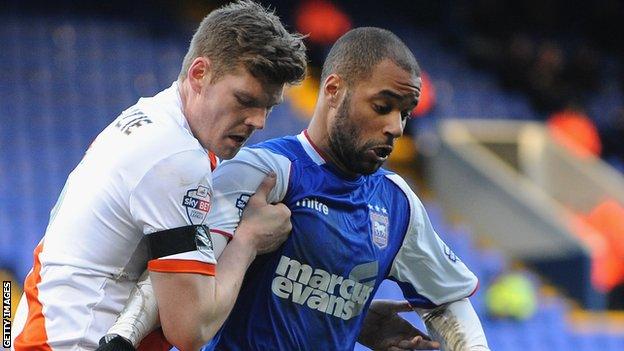 Ipswich Town's top scorer David McGoldrick has suffered knee ligament damage and could miss the rest of the Championship season.

The 26-year-old is expected to be out for 10 weeks after suffering the injury in Saturday's 0-0 draw with Blackpool.

"Didz has suffered a partial tear of the medial ligament in his right knee," said Town physio Matt Byard.

"He had an MRI scan [Monday] morning and will be wearing a brace for the next six weeks."

He added: "After that, you are looking at the rehabilitation of around four weeks, so in all we'd expect Didz to be out for 10 weeks, which obviously takes us up to the last week of the season."

Town are unbeaten in their last five games and are five points adrift of the play-offs.

McGoldrick had scored in each of his three previous matches and has 16 in total for the season. Daryl Murphy, Ipswich's next highest scorer, has half of that amount.

Former Wolves striker Sylvan Ebanks-Blake could now be given a more prominent role.

The 27-year-old arrived at Portman Road in December but has started just one game since suffering a broken leg and ankle ligament damage in April.