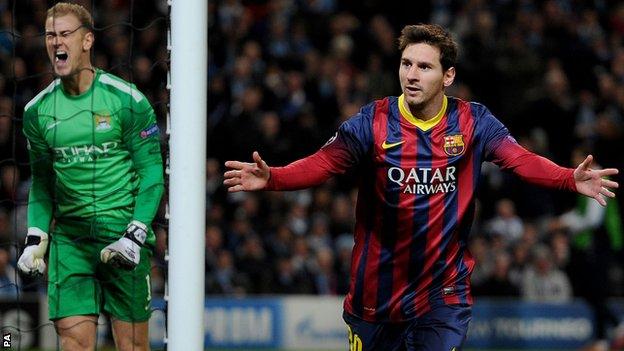 Messi broke the deadlock from the spot in the 54th minute after he was fouled by City defender Martin Demichelis, who was also sent off for a challenge that was initially made outside the penalty area.

And despite a defiant response from Manuel Pellegrini's side, Alves delivered what is surely the decisive blow when he exchanged passes with Neymar before sliding a cool finish under City keeper Joe Hart in the final minute.

City's supporters applauded their side's efforts at the final whistle but the subdued atmosphere around the ground moments later reflected the brutal reality that the task of recovering this tie is surely beyond them in the second leg at the Nou Camp.

This was not vintage Barcelona but they still carried enough threat to produce moments such as Andres Iniesta's brilliant pass that led to the penalty and, without the presence of Sergio Aguero, City's threat was limited.

Games such as this were what City's Abu Dhabi-based owners had in mind when they bankrolled the club - and while they are moving closer to the elite group there is still, understandably, work to do.

Pellegrini learned the lessons of defeat by Bayern Munich in the group stage and opted for Alvaro Negredo as a single striker - but City had to remain patient in the face of Barcelona's domination of possession early on.

"To stop Barcelona you have to do it as a unit - if you do it individually they will pass around you. You have to be incredibly fit and get numbers around them. It only takes one person to switch off and you get punished. Inevitably, if you have Xavi, Andres Iniesta and Sergio Busquets, who are great at keeping the ball, you will be physically tested - and you could see Manchester City were very tired at the end."

City, however, were able to contain Barcelona, apart from a dangerous long-range effort from Xavi that Hart turned away.

The muscular Negredo was posing problems for Barcelona with his physical presence, while keeper Victor Valdes had to come through a crowd to save after David Silva's free-kick sparked a scramble in the six-yard area.

City would have felt satisfied with that opening 45 minutes but they were undone nine minutes after the restart and left feeling a sense of injustice as Messi put Barcelona ahead from the spot.

They felt Sergio Busquets had fouled Jesus Navas, allowing Barcelona to develop a move that ended when Demichelis fouled Messi as he raced on to Iniesta's pass.

Swedish official Jonas Eriksson pointed to the spot, even though City had a case that first contact was outside the area, then made matters worse by sending Demichelis off before Messi stroked in the penalty.

Barcelona's share of the possession over the course of the first leg was 68.4%

It led to an instant reshuffle by Pellegrini, who sent on Joleon Lescott and Samir Nasri for Navas and Aleksandar Kolarov in a bid to ensure there was no further damage as a result of City's numerical disadvantage.

Barca, though, were enjoying the sudden change in circumstances and Alves should have hit the target when he found space in the area, only to shoot wide of the far post from an angle.

Both sides made changes with 17 minutes left, Edin Dzeko coming on for Negredo while Brazil superstar Neymar, returning from injury, replaced Alexis Sanchez for Barcelona.

City were still battling and Valdes was forced into a sharp save from Silva's volley following fine approach work from Yaya Toure and Pablo Zabaleta.

If City could have restricted Barcelona to a one-goal lead they would have travelled to the Nou Camp on March 12 with some hope - but Alves has surely put the Catalans into the last eight.