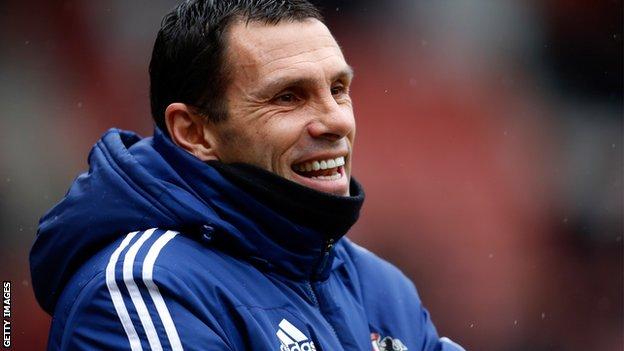 Sunderland head coach Gus Poyet has praised the role played by the fringe players in his squad during the on Saturday.

Poyet changed nine of the XI that with Craig Gardner's 25-yard strike securing a quarter-final spot.

"I was really pleased with the players who have not played much football recently," Poyet told BBC Newcastle.

"People forget about these players very quickly. I don't, and they shouldn't."

Sunderland have faced a heavy run of games since Poyet was appointed boss in October after as well as moving out of the Premier League relegation zone.

For the FA Cup tie with Southampton, the Uruguayan chose to utilise his whole squad despite the three days prior.

Argentine Ignacio Scocco made his debut alongside compatriot Oscar Ustari and fellow January recruit Santiago Vergini, who were both handed their second starts for the club.

"Giaccherini was terrific," said Poyet. "Andrea Dossena played a good 70 minutes, Connor Wickham did well off the bench and the new players are getting up to speed.

"Winning with these guys, especially after losing to Hull, really gives you a lift for training in the following week."