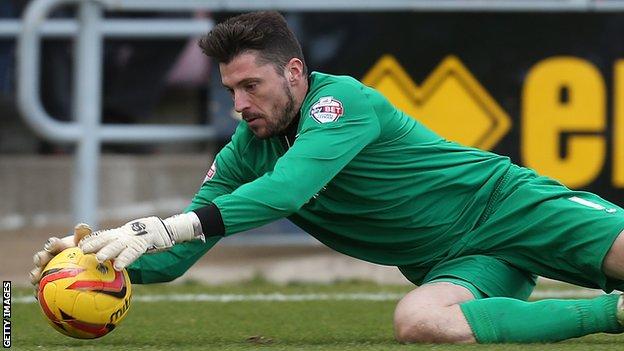 Northampton Town goalkeeper Matt Duke says they need the fans' support "more than ever" in the remaining 16 matches of the season.

The Cobblers are five points from safety in League Two after Saturday's 2-0 defeat by Fleetwood.

Duke told BBC Radio Northampton: "I'd just ask us them to encourage us through the 90 minutes. They can vent after the game if they need to.

"Get vocal - we're trying everything we can to get points on the board."

He added: "There wasn't much between the teams.

"We can take positives from the performance. We [need to] be on the front foot a bit more, try to get the ball down and pass it, start well at home and not give sloppy goals away.

"With the attacking players we've got now, they're good enough to win most games. We can't hope for other people to do us a favour, we need to pick results up quickly.

"The games are at home and we've got to take that as a massive positive. Hopefully we can push on now. But we need the fans more than ever."

Duke admitted he has been disappointed with mistakes which have led to goals in recent games.

"I've not been happy with a couple of goals recently but the wind is a nightmare for a goalkeeper," the 36-year-old said.

Since Chris Wilder took charge at Sixfields, Northampton have won once and drawn once and lost twice in their four matches.

He has brought in seven players, including the loan signing of Millwall striker John Marquis.

"The gap is still there but we feel we should've got something out of today," said Marquis.

"We were confident we'd get at least a point. At least we were playing the right stuff. There were a couple of half chances, and the sharper I get, one of them will go in.

"There's a few games left to the end of the season and I'm definitely looking to score some important goals to keep Northampton in the division."