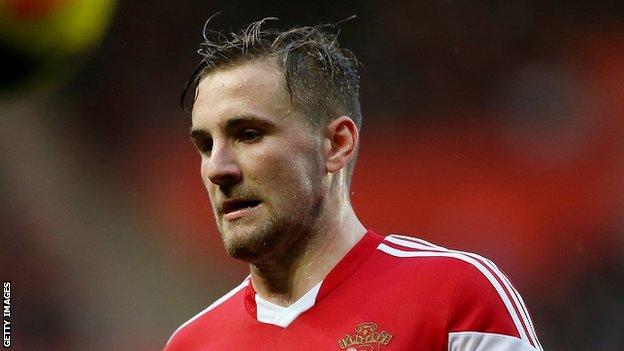 Southampton full-back Luke Shaw has apologised to the club's supporters after the Saints bowed out of the FA Cup at Sunderland in the fifth round.

Manager Mauricio Pochettino made six changes for the tie, but Shaw said the players were to blame for the 1-0 loss.

"We're sorry to the fans who travelled all that way to see a disappointing display like that," he said.

"The manager had faith to switch the team and the players should have done better."

Shaw continued to BBC Radio Solent: "I'm devastated. I wanted to win the FA Cup and so did every other player.

Disrespectful of the competition, Saints supporters, especially those that travelled, and the game

"It's very frustrating. Every time we come to Sunderland we know it's going to be a very tough game. I think it's the last six times we haven't beaten them, but on Saturday we were not good enough.

"When we played them in the league not long ago we completely bossed possession in the first half, then switched off and conceded two sloppy goals, and here again in the second half we gave the ball away cheaply and that's when they took advantage and scored."

Despite having no midweek league game this week, Pochettino left a number of first-team regulars on the bench, including Jay Rodriguez, Morgan Schneiderlin and Jose Fonte.

BBC pundit Robbie Savage described the selection as "ridiculous", while Match of the Day presenter Gary Lineker said it was disrespectful of the competition and of the Saints supporters.

Shaw said: "It is very disappointing. We wanted to win the FA Cup this year and thought we had a great chance, but that's cup football and now we have a very important Premier League game against West Ham [on Saturday] and we have to focus on that.

"We still have important games to play in the Premier League and hopefully we can finish as high as possible."