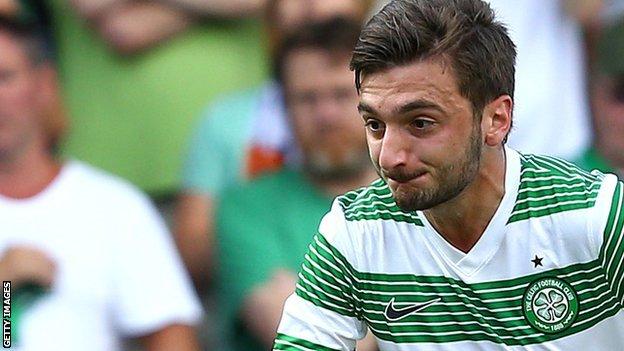 With a maximum of five loan players allowed in a matchday squad, Jackson was forced to omit one of the League One side's current six-man haul.

"I spoke to Celtic and he's having to do a pre-season with us," Jackson said of the 20-year-old striker.

Shrewsbury Town currently have six players on loan, five of which have been brought in by caretaker boss Mike Jackson.

A seventh loan player, Dutch winger Sidney Schmeltz was released on Friday afternoon to return to Holland, having also had his contract cancelled with parent club Oldham Athletic.

"He'll be doing sessions morning and afternoon to get him up to speed."

Until his loan move to Shropshire on 24 January, Atajic had made just three first-team appearances for Celtic, all as a late substitute, scoring in the most recent of them - the 5-0 Scottish Premiership win at Motherwell in early December.

In between two late appearances from the bench, the Swede has made just one start for Shrewsbury, being substituted before the hour mark in their previous home game - the 1-1 draw with leaders Brentford.

But Jackson admitted that Atajic was not seriously in his mind for Saturday's match.

"With the way Port Vale play and the way the pitch was going to be and his fitness, at the moment it wasn't a game for him to be in," he told BBC Radio Shropshire.

Jackson, whose team have drawn both their home games since he took over, made five changes for his fourth game in charge against Vale.

As well as bringing in former Vale goalkeeper Joe Anyon for his first league start of the season, in place of Chris Weale, he also restored Jermaine Grandison in a new-look three-man central defensive system.

And he also paired new loan men Nathaniel Mendez-Laing and Miles Storey up front for the first time.

"I took a bit of a gamble with Jermaine, but he was outstanding," Jackson added.

"And the two up front had a bit of spark and a bit of pace about them."