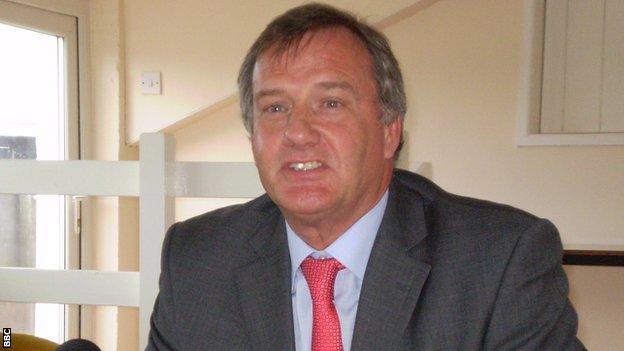 But Keyte, chairman since 2010, will only quit if the right offer comes along from fresh investors.

The Bulls board say the recent signing of new leases to help the redevelopment of Edgar Street will put the club on a firmer financial footing.

Hereford's 7-0 defeat at Luton was only the third time in their 90-year history that they had been hit for seven goals.

Their biggest Football League battering is a 7-1 defeat by Mansfield Town in a Division Three encounter on Boxing Day 1994.

The Bulls were also beaten 7-0 in a League Cup second-round first-leg tie by Division One side Middlesbrough in September 1996.

The Bulls' worst league defeat in 50 years takes their tally of goals conceded to 10 in two games since the January deadline day sale of key midfield man Josh O'Keefe to Conference Premier rivals Kidderminster Harriers. And boss Martin Foyle admits that he feared a heavy defeat was just around the corner.

"Did I see it coming? Yes I did," he told BBC Hereford & Worcester.

"There's been problems in the camp for a long time that people don't see on the outside."

"At 1-0 half time we're still in the game," said Foyle. "The message was 'don't concede early', but we get caught by a simple header from a set piece.

"It hurts me. If you want the honest truth, they are miles away - a million miles away from us. The gulf between the top half of the Conference and the bottom half is getting bigger and bigger."

The Bulls are back on the road this Saturday when they are due to visit Dartford.