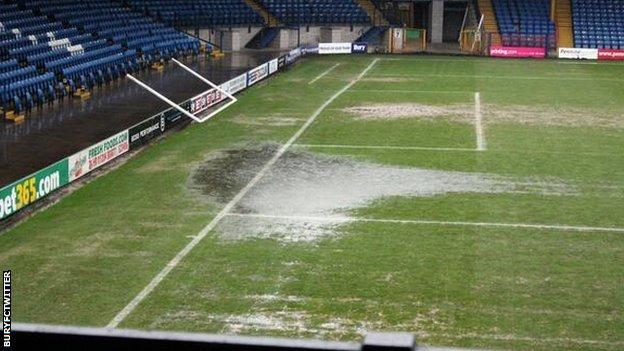 Saturday's match against Bristol Rovers was the second home game to be postponed this season.

Shakers chairman Stewart Day has previously spoken about relaying the pitch before the start of next season.

You've got to be patient, there's nothing you can do, it's nature

"We've got to rebuild the pitch and get the underneath right so it flushes away," Flitcroft told BBC Radio Manchester.

"With most pitches in the Premier League and the Championship it's how they build them and how they construct them, so we've certainly got to look at the construction of our pitch.

"If you just concentrate on the top surface and get that right, then we're still going to end up having the problems we have now."

With recent away games at Mansfield, Torquay and Accrington also falling foul to the weather, Flitcroft has said it was causing chaos in their battle against relegation.

It means the Shakers have played just five times in 2014 and the former Barnsley boss expects more games to be called off this month.

"February is going to be a shut out. I think the last three years it's been a shut out month if you look down at games being off," he said.

"The lads are champing at the bit now, they're ready, they're well prepped but we want to get in that rhythm.

"You've got to be patient, there's nothing you can do, it's nature, so we've just got to stay positive and focused."