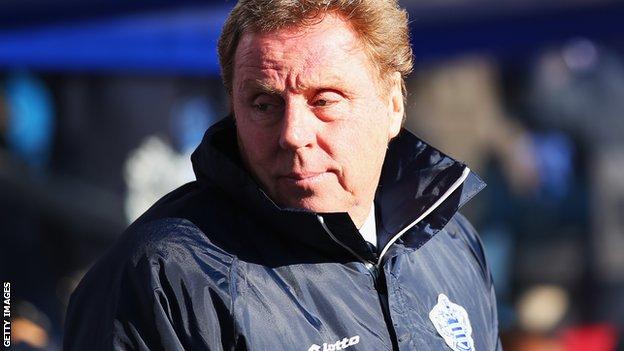 Manager Harry Redknapp says QPR's chances of automatic promotion to the Premier League should not be dismissed despite a third match without a win.

Sunday's 3-1 defeat at home by Reading left the R's four points behind second-placed Burnley, with a game in hand.

He told BBC Radio 5 live: "It is all to play for and we have just got to put a run together. We are capable of that.

"We have got every chance of doing it still. Don't write us off because we will be bang there."

Suddenly from having a regular look to it, we have had to revamp the team. At the moment we look a little like strangers

QPR won all four of their league games last month, but are now 11 points behind Championship leaders Leicester after drawing with Burnley and defeats by Derby County and the Royals.

Despite falling out of the automatic promotion places, Redknapp remains optimistic of securing an immediate return to the Premier League.

"Every year I have a challenge and it is no different to any other year," he said.

"All the years I have been in football it has always been the same. That is what you are in it for.

"We are still the highest of the teams which came down last year and it is not easy to go straight back up.

"There is a long way to go and we are still sitting above Reading. They'd like to be in our position."

Redknapp says he will need to re-jig his starting XI after losing defender Danny Simpson, winger Matt Phillips and top scorer Charlie Austin to long-term injuries, along with midfielder Joey Barton to a two-match ban.

"We lost three players who were ever-present and important players for us," he said.

"Suddenly from having a regular look to it, we have had to revamp the team. At the moment we look a little like strangers.

"I've got to come up with a way of playing now that will suit us and get us some results.

"Hopefully we'll get Ravel Morrison in this week, who might just give us a bit of magic. Hopefully he can make a difference."