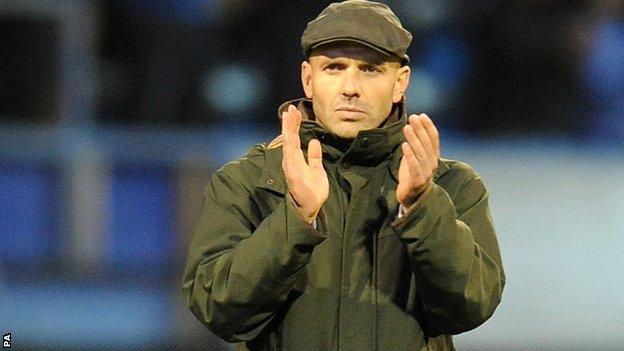 Exeter City boss Paul Tisdale says his side's 3-2 win over Southend was "a real fillip" after a difficult recent spell for the Grecians.

City started the season strongly but a run of one win in nine games saw them slump down the League Two table.

"It's obviously better than losing," he told BBC Radio Devon.

"We've gone four games unbeaten, we've got a fabulous new player in our team in Eliot Richards and we've got players back in form."

Richards, who joined from Bristol Rovers in a swap loan deal involving Alan Gow heading to the Memorial Stadium, scored the winner in his second game for the club after coming off the bench.

Tisdale said the positives were stacking up for Exeter as the club looked to push back up the table.

"Matt Oakley had his first game for a few months and we had another young player who made his debut after coming though the ranks in Christy Pym in goal," he said.

"It's a real fillip going into Tuesday's game against Morecambe.

"We played really well against Southend and we deserved it, I don't think you can argue with that.

"We played the conditions really well, kept it on the floor and created chance after chance."