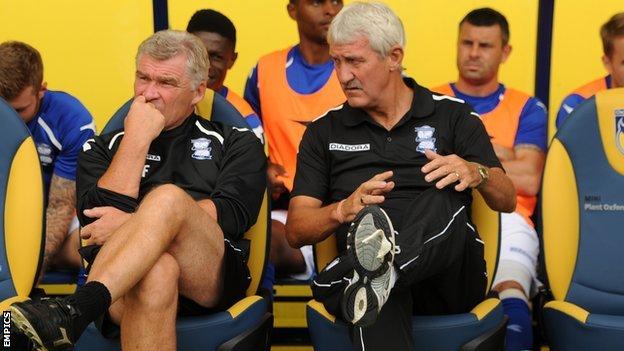 The futures of Birmingham City's assistant manager Terry McDermott and first-team coach Derek Fazackerley are in doubt, amid reports the pair have left the Championship club.

McDermott and Fazackerley, both 62, were brought to St Andrew's by Lee Clark when he became boss in June 2012.

Birmingham have so far refused to confirm or deny the reports.

A statement on the club website said they had no comment to "issue on the matter at this moment in time".

If the pair have left, their last game will have been a 2-1 home defeat by former club Huddersfield on Saturday.

McDermott was formerly Clark's number two at the Yorkshire club from December 2008 to February 2012, with Fazackerley working there in a coaching role until October 2010.

Home not sweet home for Blues

Birmingham have not won a Championship match on their own ground since beating Millwall last October, a run of 11 games.

And 41-year-old Clark has blamed their current malaise at St Andrews on a "fear factor" among his players.

"It must be psychological and the players must get rid of it," he told BBC WM.

"It's happening too often at home. We need to get some results and quickly."

Only Charlton and bottom club Yeovil have a worse home record in 2013/14 than Birmingham - but six wins away from St Andrews have kept them clear of the relegation zone.

"It's frustrating because I'm sick of saying it. We're not giving the fans enough at home," said Clark.

"They should be on the ends of their seats [seeing] chances, crosses and shots. There's none of that."

Despite their struggles at home, Clark praised the club's supporters for not showing any hostility to the team.

"I don't understand why [home results are poor], because the fans don't get on their backs - they're brilliant," he added.

"We've just got to keep working, keep trying to convince them that they're good players and to believe in themselves."