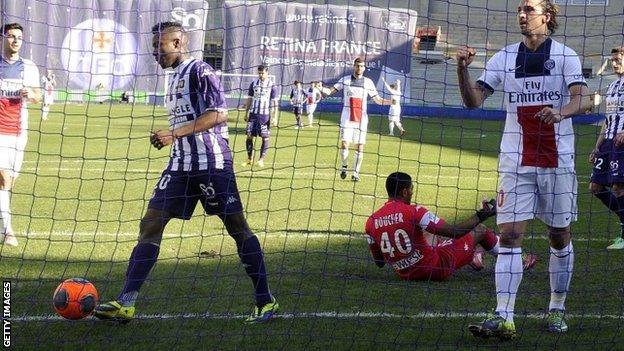 Paris St-Germain striker Zlatan Ibrahimovic scored his third hat-trick of the season as his side beat Toulouse to go five points clear at the top.

The Swede put the visitors ahead with a penalty before Wissam Ben Yedder volleyed home an equaliser.

Ezequiel Lavezzi restored the lead after good work from Ibrahimovic, who then added a third with a header from Yohan Cabeye's free-kick.

The 32-year-old striker's 37th of the goal of the season for PSG - from 36 games - came from a rebound after his penalty had been saved by Toulouse keeper Zacharie Boucher.

The victory restores champions PSG's five-point advantage at the top of Ligue 1 after title rivals Monaco had beaten Reims 3-2 on Friday night.

Ibrahimovic, who has scored six goals in his last three games, is the runaway top scorer in France with 22 league goals, nine ahead of anyone else.