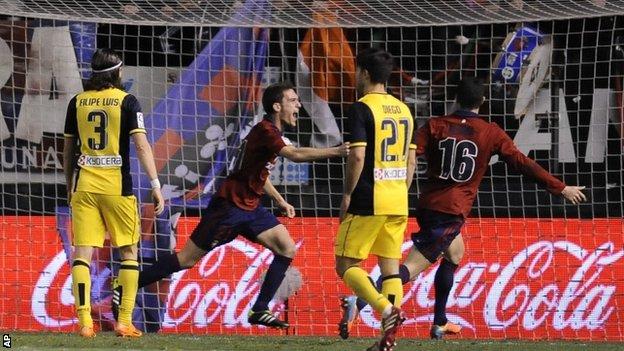 Atletico Madrid missed the chance to overtake Barcelona in La Liga as they suffered a heavy defeat away to Osasuna.

The visitors would have gone second with victory, and could even have moved top with a five-goal win, but neither result ever looked like happening.

Osasuna, who began the day only four points above the relegation zone, started brilliantly and deserved their sixth-minute opener, which Alvaro Cejudo volleyed home unmarked from Emiliano Armenteros's cross after a short corner.

Armenteros then doubled their lead with a powerful effort from 20 yards after several Atletico defenders failed to clear the ball.

And the game was decided as a contest three minutes before half-time when Armenteros played the ball to Damia Abella, whose brilliant cross was headed home by Roberto Torres.

Atletico, who took 79 minutes to manage their first shot on target, never looked like finding a way back into the game.

They host league leaders and city rivals Real Madrid, whom they trail by three points, next Sunday.

Real beat Elche 3-0 this weekend to go clear of Atletico and Barcelona, who lost 3-1 at Real Sociedad.