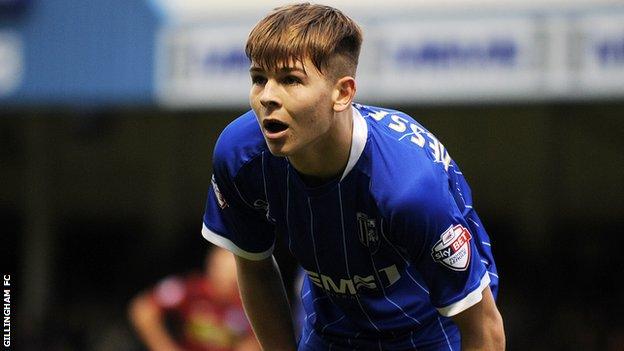 Gillingham midfielder Jake Hessenthaler hopes he can go on to emulate his father Andy after signing a new long-term contract at Priestfield.

Hessenthaler Sr made over 360 appearances during a spell with the Kent club which lasted almost a decade.

"I am proud of what my dad's done here and if I can achieve half of what he has done here then great," 19-year-old Hessenthaler told BBC Radio Kent.

"I like to think I can start to make myself a bit of a name here as well."

Jake came through Gillingham's youth academy and made his first-team debut in November. In total he has made 10 appearances for Peter Taylor's side.

"At the start of the season I just had to keep going, keep believing in myself and that I would get my chance," he said.

"When I did I needed to take it.

"Hard work does pay off so hopefully I can get even better. I never really thought about if it might not ever happen. I never doubted myself.

"With the support of my dad, it was about determination and working hard on the training ground trying to get noticed.

"I got my opportunity through injuries [to others] but players are back now and I am not expecting to play every week as I am still young.

"Whenever I get my chance I will play to my maximum and try and help the team."

The Hessenthaler name is synonymous with Gillingham's recent history, with Andy spending over four years as player-manager in the early 2000s and returning for a second spell in charge in May 2010.

However the 48-year-old stepped down as manager two years later after twice failing to reach the League Two play-off places.

Jake says guidance and advice from his father has already helped him in his fledgling career.

"He got released from Charlton when he was 18 and he went into non-league," he said.

"He said it is never over until you want it to be over. Football is a game of opinions and if one manager doesn't like you another one might.

"You have just got to keep working hard and it does pay off in the end.

"He does help because he has had the experience. He has been through it all and I listen to him a lot."

The teenager's new contract will see him remain at Priestfield until the summer of 2019, and current Gills boss Taylor has described Hessenthaler as "an outstanding player".

"He is the future of the club and if you get good, young players like that coming through the youth system you have got to give them that opportunity," Taylor told BBC Radio Kent.

"He has worked extremely hard to get in the team. He is a very good player and we play better football when he is in the team.

"I have got no doubt Jake will be a great signing and he may not be here in four years, as if he carries on playing the way I know he can play he might be transferred to a big club.

"He has got the perfect man as his dad. He is very lucky with that and he needs to take advantage of it.

"The good thing about Andy is he doesn't get involved and he only says the right things at the right times."