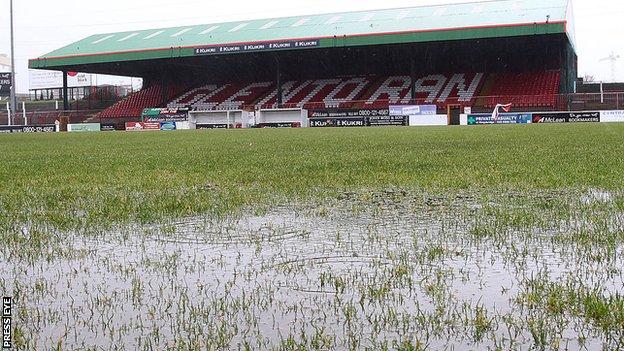 Monday night's Irish Cup replay between Glentoran and Armagh City has been postponed because the pitch at the Oval is waterlogged.

The game has been rescheduled for Saturday, 1 March, which is the day of the quarter-finals.

Armagh forced the replay by drawing 1-1 with the cup holders at Holm Park.

The postponement means William Garrett and Marcus Kane, both sent-off against Ards, are suspended for Glentoran's league clash with Linfield on Friday.

There are two other cup matches scheduled for tonight with Bangor at home to Warrenpoint in a replay, and Ballinamallard hosting Glenavon.

In the Irish Premiership, Dungannon Swifts are at home to Coleraine in a rearranged fixture. The match was given the go-ahead after an afternoon pitch inspection at Stangmore Park.