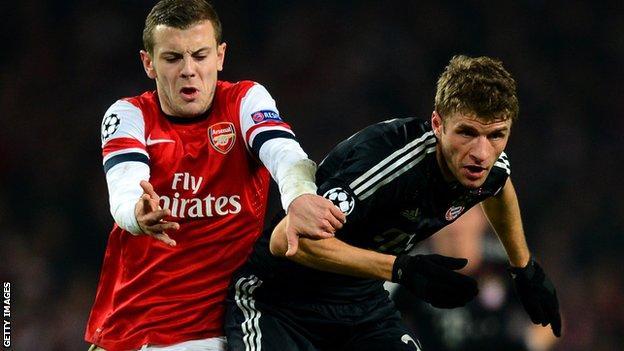 Bayern Munich are prepared to "go to the pain barrier" in Wednesday's Champions League match at Arsenal, according to midfielder Thomas Muller.

The European champions have lost only once in 34 games going into the first leg of the last-16 tie - but Muller says they are wary of the Gunners.

"It'll be a tough game in London - we know we've got to go right to the pain barrier," said the Germany player.

"We're off to London feeling good and with a great run under our belts."

Since former Barcelona coach Pep Guardiola took over in the summer, the Bundesliga champions have enjoyed an extraordinary run of form.

Their only two defeats this season have come against Borussia Dortmund - in July's curtain-raiser to the German season, the DFB Super Cup - and against Manchester City, in the final round of Champions League group games.

They lead the German league by 16 points, having managed 19 wins and two draws - and their goal difference column reads 57 for and nine against.

The Bavarian giants have faced Arsenal in the last 16 of the competition on two other occasions - last season and during the 2004-05 campaign.

Last February, Bayern, then managed by Jupp Heynckes, secured an impressive 3-1 win at the Emirates Stadium before suffering a 2-0 defeat at home in the second leg.

They went on to beat Borussia Dortmund in the final at Wembley in what turned out to be a treble-winning season.

Bayern also had the better of the Gunners nine years ago, when two goals from Claudio Pizarro helped the German club, under the guidance of new Fulham manager Felix Magath, record a a 3-2 aggregate win.