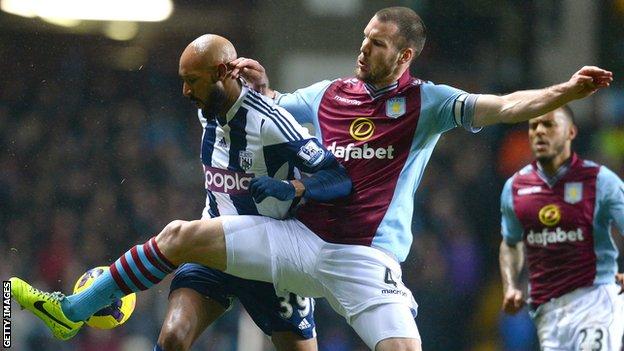 Aston Villa captain Ron Vlaar says team spirit at the club has not been dented by a run of three Premier League games without a win.

After consecutive defeats by Everton and West Ham, Villa were held to a 0-0 draw by struggling Cardiff, and now lie four points off the relegation zone.

"The results before that [loss to West Ham] were good so it didn't really dent confidence," Vlaar told BBC WM.

"But it does do something; you have to react and we've done that well."

After Villa's 4-3 win over West Bromwich Albion, they suffered defeat at Goodison Park before losing 2-0 at home to West Ham - a game Vlaar missed because of a hamstring injury.

"After [the defeat by West Ham], the team spirit we've shown has been really good," the 29-year-old said. "Everton is a game you can lose.

"It's really close in the table but we definitely need points. We can go on with the spirit we've shown and we can build on things."

After having to settle for a point against Cardiff, a game in which Villa kept only their second clean sheet in 2014, Vlaar says his side need to begin picking up points rather than focusing on letting in fewer goals.

"It doesn't matter because the points are more important, but it's important for confidence of the team to try and concede less goals."