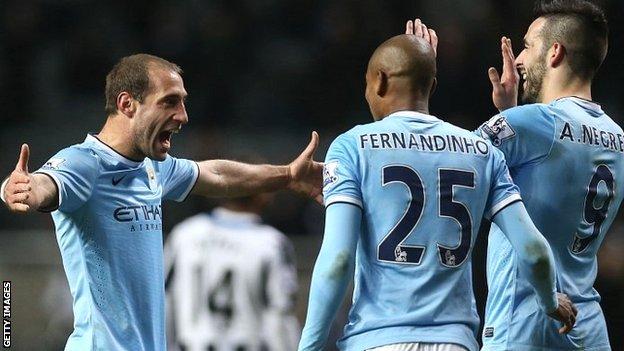 Manchester City right-back Pablo Zabaleta says his side cannot afford to change their attacking style when they play Barcelona in the Champions League.

Four-time European champions Barcelona travel to Etihad Stadium on Tuesday for the first leg of their last-16 tie.

"It's important we stick to our game, that we go on the attack because we have attacking players," said Zabaleta.

City, who have scored 74 goals in 20 home games this season, are in the knockout stages for the first time.

One of their two defeats on home turf came at the hands of former Barcelona boss Pep Guardiola and his Bayern Munich side in the group stages in October.

But City midfielder Martin Demichelis says City are determined to impose themselves on the Catalans' short passing game.

"We are really up for this. We will approach the game with aggression and, as we always say, if we go out of a competition, it's because the opposition plays better than us, not because we are scared of competing," said Zabaleta's fellow Argentine.

Zabaleta moved to City from Barcelona's city rivals Espanyol in 2008 and both he and Demichelis have represented Argentina alongside the Spanish champions' star player Lionel Messi.

Midfielder Yaya Toure spent three seasons at the Nou Camp before moving to City, and, behind the scenes, City's director of football Txiki Begiristain and chief executive Ferran Soriano both moved to Manchester from similar roles at Barcelona.

However Zabaleta is mindful that, despite the links between the clubs, City have moved into uncharted territory by making the latter stages of the tournament.

"For this group it's something new, something important to be able to play against a big team like Barca and it's important we enjoy it," the 29-year-old said.

"It's a special match because we know we will be coming up against one of the best teams in the world. For us it's a very important match."