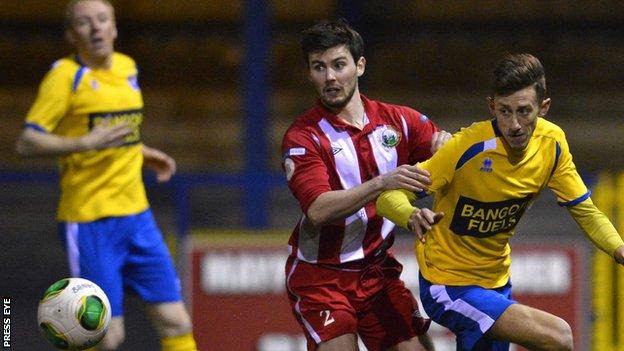 Bangor will play Championship Two side Queen's University in the Irish Cup quarter-finals after beating Premiership side Warrenpoint Town.

Barry Walsh's 61st minute strike was enough to give the Seasiders victory in Monday night's sixth round replay.

Walsh shot in from just inside the area after home striker Stephen O'Neill had laid the ball off.

Elsewhere in the Irish Cup, the sixth round match between Ballinamallard and Glenavon had to be abandoned.

Both managers agreed the ref was right to abandon the game and the teams will try again at the same venue on 1 March.

That is also the date for the replay between Glentoran and Armagh City which was postponed as the pitch was flooded.

Following their win at Clandeboye Park, Bangor will be away to Queen's in the last eight clash on Saturday, 1 March.

It was the second time this season Bangor, the current Championship One leaders, had beaten Warrenpoint.

At the start of the season the Intermediate side, managed by former Linfield and Ballymena midfielder Garth Scates, pulled off a 3-2 win in an Irish League Cup tie at Stangmore Park.

It was a frustrating night for Warrenpoint as they struggled to create any clear-cut scoring opportunities.

Bangor boss Scates said: "We knew if we stuck together we could get a result here.

"We could have been ahead at half-time and overall we thoroughly deserved the victory.

"We brought Barry Walsh in from Killyleagh and he has made it impossible for us to leave him out. He is an effective player."