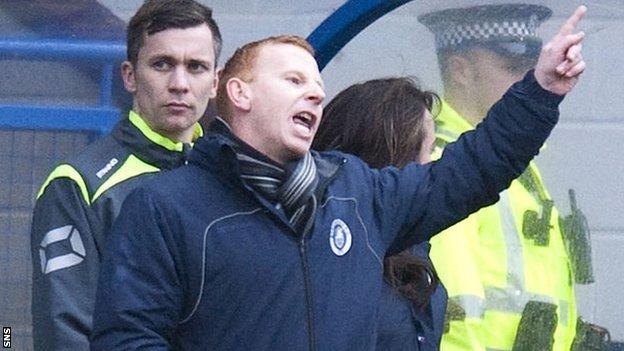 Stephen Aitken remains hopeful that his Stranraer side can overcome a marathon bus journey as well as Inverness Caley Thistle in their Scottish Cup replay.

The League One part-timers will travel the 260 miles from the south of Scotland to the Highlands on the afternoon of Tuesday's match.

"It's not ideal preparations for a game, but we just have to get on with it," said the Stranraer manager.

"But, if we can play as well as the first game, who knows what can happen?"

Stranraer had already knocked out Scottish Premiership opposition this season, beating Ross County 3-2 in the second round of the League Cup then gave Hibernian a scare before losing 5-3 at Easter Road in the next stage.

A 1-1 draw at Ibrox in December means they are also the only side to take a point off League One leaders Rangers and Aitken's side have surprised many by sitting in third place.

"After the first game, we certainly showed people on that day that we can compete in a one-off game," the manager told BBC Scotland.

It will take us the best part of four or five hours to get up there, depending on traffic

"They are a very good side and will be strong favourites - and rightly so.

"I think we gave a great account of ourselves on the day and just switched off for a split 30 seconds after we went 2-1 ahead.

"Other than that, we coped with everything Inverness flung at us."

Aitken explained that clubs like Stranraer faced difficulties with availability of players for midweek games as well as logistical problems.

"It will take us the best part of four or five hours to get up there, depending on traffic," he said.

"Fortunately, this time, all the players are available, so we have to thank all their employers for making that happen.

"But it is very difficult when these games come about. We've now got four midweek games on the bounce and we're just hopeful that the players can make it."

Caley Thistle midfielder Aaron Doran insists Inverness will not have it easy after admitting the Blues' performance in the first tie left him shocked.

"They played some good football," he said. "In the first five minutes, they broke on us and had five or six passes that put them through on goal and Dean Brill had to make a good save.

"Their quality surprised me a little bit, but they did have some good players in their team."