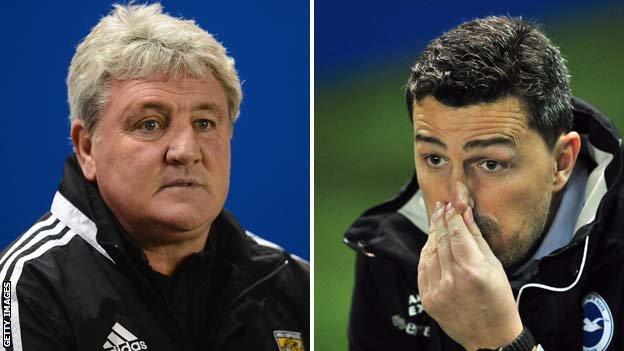 The two teams will meet again on Monday 24 February after matches on Saturday.

Uefa rules prevent the game being staged alongside Champions League action on Tuesday and Wednesday.

"I find that ridiculous. Is it going to be a real problem for them? I somehow doubt it," said Bruce.

"I don't think there will be many tuning out of Barcelona against Manchester City to tune into Hull versus Brighton, no disrespect."

Yannick Sagbo's 85th-minute strike for Bruce's side cancelled out Leonardo Ulloa's opener in Brighton and Hull's first attempt to settle their last-16 meeting.

Barcelona actually visit Manchester City this Tuesday in the last 16 of the Champions League, but the FA Cup replay next Monday is in order to avoid a clash with Tuesday's meeting between Manchester United and Olympiakos, and Chelsea's match against Galatasaray the following evening.

Hull, who are three points above the drop zone in the Premier League, will play relegation rivals Cardiff on the Saturday afternoon before Monday evening's replay.

Brighton, who are four points off the Championship play-off places, meet ninth-placed Wigan at home in a game that kicks off at 15:00 GMT on the same day.

"I don't think it is good for anybody to play two games in three days, but it is what we have to do and we will do it," said Garcia.

"It is not the best scenario for us, but the competition is like this."

The Merseyside derby had been shifted to that date because of Liverpool's participation in the League Cup final earlier in the season.

Uefa claimed that the clash should not have happened as the Premier League is part of the European Professional Football Leagues body, which has agreed not to stage games on Champions League nights.

The Premier League disputed that it was bound by the agreement, saying clashes were "sometimes inevitable".