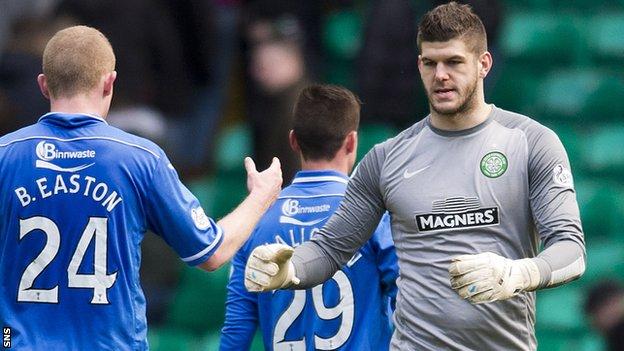 "There is no reason he should not be picked in that England squad to go to the World Cup," said Bonner.

"He's as good as any of the other goalkeepers available."

Forster has to survive only 31 minutes against Hearts at Tynecastle next Saturday to beat Clark's record of 1,155 minutes without conceding a league goal.

"It is a fantastic achievement and you can't underestimate it even though people will talk about the competition he's up against," Bonner told BBC Scotland.

"But, when called upon, you have got to make that save and against St Johnstone he did not have a lot to do, but he made that vital save again.

"And he had that unbelievable save against Hibs to deny young Stanton - that got me out of my seat."

Forster broke into Roy Hodgson's England squad in October and made his debut in a friendly against Chile in November.

I think he will develop further. He is only 25 years old and there's still room for improvement

Some have suggested that Hodgson wanted the 25-year-old to move to an English top-flight club in January to improve his chances of making the squad for this summer's World Cup finals.

But former Republic of Ireland goalkeeper Bonner insists that, although he concedes that Manchester City's Joe Hart will remain first choice, there is no reason why Forster cannot be in the party heading for Brazil.

"He has improved dramatically over the last three or four years and he's proved it also in the Champions League," said Bonner, who has no doubts that Forster could play in England's Premier League.

"He can play and I think he will develop further. He is only 25 years old and there's still room for improvement."

After the victory over St Johnstone, Celtic manager Neil Lennon described Forster as one of the club's best-ever goalkeepers, but Bonner has spotted areas where he can get even better.

"I think he's improved his speed at getting down into corners as he was a bit rigid when he came from Newcastle," said the former Celtic goalkeeper.

"I have to give credit to Stevie Woods, the goalkeeping coach. Where he still has to improve, for me, is we question his domination of the box a little bit on crosses.

"The other thing he has to do to go to the very top is to build the game from the back. That's a combination of himself and the team.

"Technically, he is okay - he can play it with his left and his right - but the older he gets, the more leadership qualities will come on."