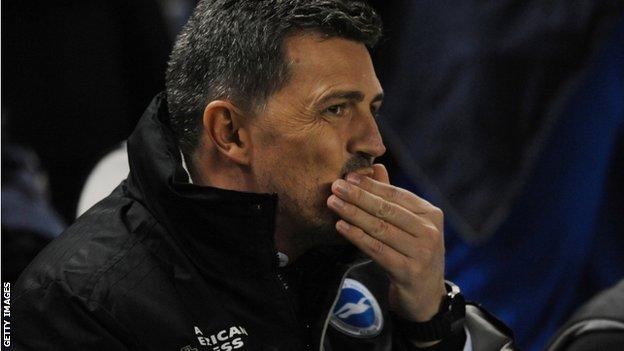 Brighton moved to within three points of the play-off positions after coming from behind twice to end a three-match losing streak with a draw at Blackburn.

David Rodriguez put the visitors ahead from inside the area early on before Jordan Rhodes levelled from close range.

Tom Cairney put the hosts ahead from a tight angle before Gordon Greer levelled from six yards.

Brighton had lost their last three matches without scoring but Stephens's late equaliser moves them to within three points of sixth-placed Reading.

Blackburn have only won one of their last seven matches and are now seven points away from Reading.

The hosts started slowly and Brighton took the lead when Rodriguez latched onto Jesse Lingard's through ball to finish.

Gary Bowyer's men hit back though and Rhodes scored when he diverted in Tom Cairney's free-kick.

Cairney, returning from injury, then finished well from an acute angle after good approach play by Tommy Spurr.

Rovers were on top after the break but, following a host of missed chances, Greer fired home Kazenga Lua Lua's cross to level.

Rhodes's 50th goal for the club came from the penalty spot, after Grant Hanley was fouled, but Stephens headed home Lingard's cross to equalise.

Blackburn boss Gary Bowyer: "We're on the receiving end of it tonight. In the last two games it's been us scoring late on, but I think that's the least we deserved.

"Brighton only had four shots on target. I'm majorly disappointed because the first goal we scored was an outstanding finish, second goal was an unbelievable move and third goal was a penalty.

"And then you look at the goals we've conceded, I'm majorly disappointed. We've kept 12 clean sheets this season and we have to get back to that quickly because we're scoring goals."

Brighton assistant head coach Nathan Jones: "This was the least effective we've been in terms of possession and control of the game and ironically enough we scored more goals than we have in the previous three but that's football.

"We're very pleased with that point because it stops the run we're on, it's a game in hand so it takes us a point closer to the play-off pack so that's one pleasing thing.

"Nowadays if you're four points off it, it takes two results and two games. Now it's one game to get us back in it and that's a positive really."