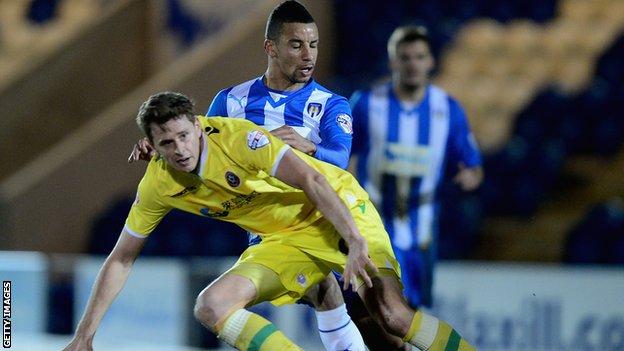 Freddie Sears clipped Ben Davies in the box and Porter netted his eighth goal of the season with three minutes to go.

The visitors dominated the game but rarely troubled Sam Walker, although the Chelsea loanee had to be at his best to deny a Ben Davies volley.

Colchester's best chance of the game fell to Sears but he saw his flick drop just wide of the post.

The Blades are now six points clear of the League One relegation zone, while Colchester remain only three points away from the bottom four.

Jose Baxter had the game's first chance as he went close for the visitors, while Jamie Murphy cut inside and fired wide.

A well-worked move resulted in Conor Coady, who was celebrating his 21st birthday by agreeing a loan extension from Liverpool until the end of the season, having a shot deflected wide.

John Brayford's header was easily saved by Walker, while Baxter also went close in the second half.

Second-half substitute Porter, who came off the bench to score from the spot against Nottingham Forest in the FA Cup, repeated the trick to secure his side three points.

"It would have been unjust to Sheffield United [for us] to have got a point, but I would have taken it based on how poor we were in the first half.

"Aimless balls from back to front kind of nullified what we were asking the players to do, that was the disappointing part.

"We could have been there till Christmas and probably not scored. We were just off our game tonight.

"They are working hard and when it goes tough, you've got to stick with them. My players will respond."