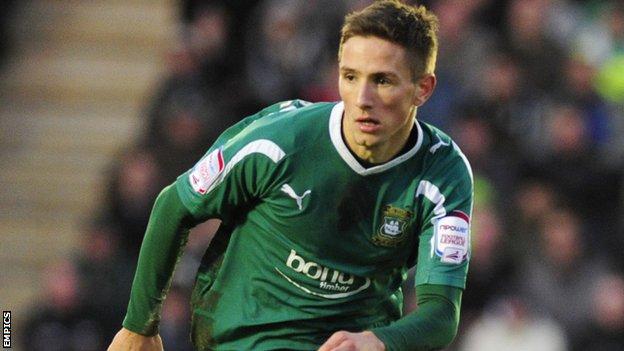 Reuben Reid slammed the Pilgrims ahead, having earlier been denied by home keeper Chris Maxwell.

Matt Parsons then hit the woodwork before Luke Young made it 2-0 with a defected second-half effort.

Antoni Sarcevic was denied in a one-on-one with Argyle keeper Jake Cole, Maxime Blanchard headed a third for Plymouth and Conor Hourihane's free-kick made it 4-0.

Argyle's third successive win away from home moves them to eighth in the League Two table, seven points behind Fleetwood in sixth.

"I'm a realist and a professional, and getting beaten 4-0 isn't good enough. Before I look for any positives out of that, I have to confront the negatives.

"There's a difference between playing and competing. We played, but I don't think we competed - when you're right on the line and on the verge of going over the line.

"That's the worst feeling I've had all season. I'm really disappointed - I'm not clever enough to come up with a better word than 'disappointed' that isn't a swear word."