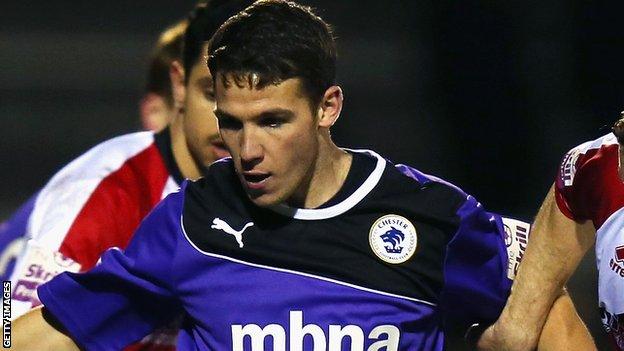 Taylor struck his first two either side of John Rooney's stunning 25-yarder as City scored three times in 10 first half minutes.

Matt Godden pulled one back for the Lambs just before the break.

Taylor's third should have settled it, but Tamworth fought back, Godden netting a second before Richard Peniket's late goal.

Tamworth should have led when the unmarked Godden blazed over Nick Chadwick's low cross from 10 yards.

Chester made them pay when Rooney set up Taylor's 23rd-minute opener.

Rooney then curled home a fine left-foot strike before Gareth Seddon flicked on for Taylor to make it 3-0.

Godden atoned for his earlier miss when he touched home from six yards.

But Taylor restored Chester's three-goal lead when he drilled home following an exquisite lofted pass from the artful Rooney.

Tamworth substitute Jesse Reindorf's late introduction fired up the home side, who netted through Godden and a drilled low shot from Peniket, but Chester held on to climb two points clear of trouble.

"It's a massive three points. Some of the stuff we played tonight was excellent.

"We knew they'd bombard us. They're in the same position as us and I thought it would be tough and the big lad (Reindorf) caused us some problems when he came on.

"But really I thought we might have scored more goals. Matty Taylor took his goals well, while John Rooney's was superb and he was close with a couple of other efforts."