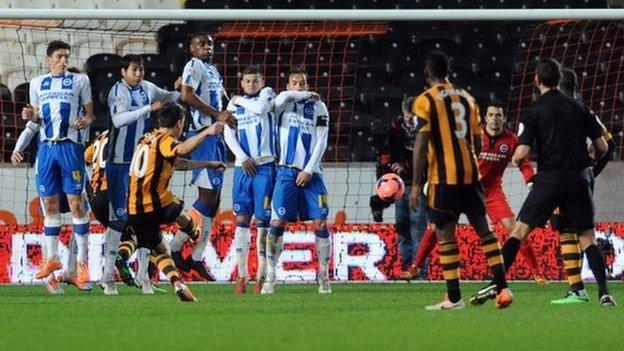 The hosts led when Jake Forster-Caskey was unable to prevent Curtis Davies's header dropping into the net.

Seagulls defender Lewis Dunk hit the bar from 10 yards out, and Leonardo Ulloa pulled one back with a header, but they could not find a leveller.

Hull, who are 11th in the Premier League, will now meet manager Steve Bruce's former side Sunderland in the sixth round.

"I expect Steve Bruce to play his strongest team against Sunderland. They will be dreaming - how many times will they have the chance to go to Wembley in a cup final?

"Brighton were too respectful of Hull. The cliche is they can concentrate on the league but nobody wants that. You want to win every game."

Yet the Tigers came close to exiting the tournament last Monday, trailing the Seagulls 1-0 with five minutes of the initial meeting remaining before Yannick Sagbo's goal forced a replay.

Neither side will have been overjoyed with having to fit in another fixture, particularly as it had to be played just two days after their most recent outings because of Uefa relegations blocking the game from taking place on Champions League nights.

Indeed, Hull made six changes from the team that beat Cardiff 4-0 on Saturday, with Brighton bringing in five new faces after losing 2-1 to Wigan.

Matty Fryatt, one of the home side's changes, missed an early chance but Hull did not have long to wait for the opener.

Davies's header from Koren's corner just looped inside a post, with Forster-Caskey unable to keep it out under pressure from David Meyler.

Hull doubled their lead when Koren's free-kick from 25 yards out hit midfielder Keith Andrews and then goalkeeper Peter Brezovan before dropping just over the goalline.

Championship play-off chasers Brighton, looking to set up a reunion with Sunderland boss Gus Poyet, improved after the break and Dunk smashed the ball off the crossbar from inside the penalty area.

Ulloa set up a tense finale when he headed home David Lopez's fantastic deep free-kick, in what was the visitors' first effort on target.

The Argentine goalscorer then curled a shot wide, and Solomon March forced Steve Harper into his only save of the match in injury-time, although an equaliser would have been undeserved on Brighton's 90-minute performance.

"The last time Hull were in a semi-final was 1930, wasn't it? There's not many around who went to that one.

"We've given ourselves a wonderful chance. It's a nice position to be in and now we've got to see if we can make it a really memorable season.

"(Wembley) is a wonderful occasion and, when you sit back in your cardigan and slippers, you remember the FA Cup. I've been fortunate enough to win it and it would be nice to go back there again if we possibly could."

"We didn't come out of the blocks in the first half. We didn't play with any real intensity.

"We didn't show up. That wasn't an Albion performance in the first half. It felt like a bit of an anti-climax, the way we played, especially after what we'd done in the first game against them.

"We made a game of it and got the goal, but it was a mountain to climb against a good Premier League side."