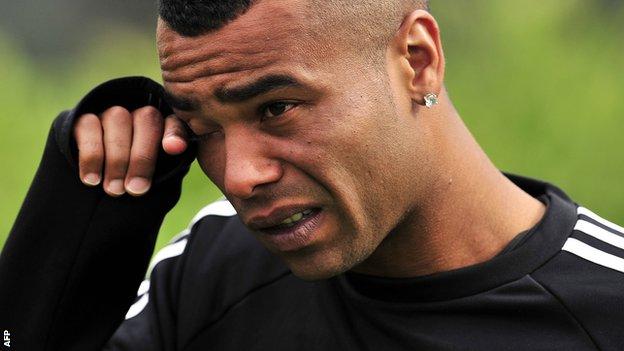 Jose Mourinho has raised doubts over Ashley Cole's Chelsea and England future by refusing to confirm if he will be given playing time.

Cole is out of contract at the end of the season and has fallen behind Cesar Azpilicueta in the pecking order.

The left-back, 33, also faces a battle to make the England World Cup squad.

When asked if he will be given games, Chelsea manager Mourinho said: "I don't know. I'm happy with the way Azpilicueta is performing."

Cole has not started a Premier League game since and did not feature in the on Saturday with reports linking the former Arsenal defender with a move away in the summer.

Cole has 106 caps for England but is being challenged by Everton's Leighton Baines. Manager Roy Hodgson is also likely to consider Southampton's Luke Shaw and Kieran Gibbs of Arsenal for March's friendly against Denmark.

"I cannot think of national teams at the same time as thinking about my team," said Mourinho.

"There are national team managers that are very clear: they go with their players.

"It doesn't matter if their players are playing in the club, if they are not playing, they go with their players.

"All these years as a club manager, I found lots of them like this."