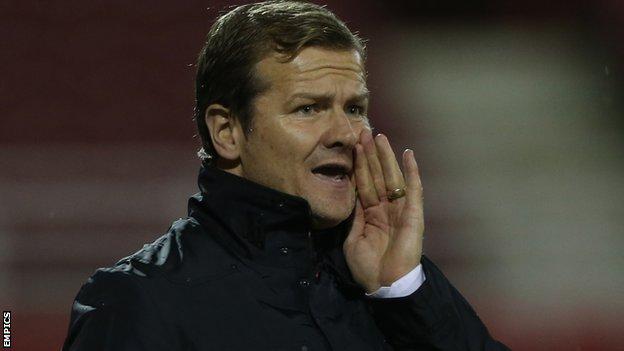 Town, who are eighth in the league, drew 3-3 on aggregate and lost 4-3 on penalties against Peterborough to miss out on a trip to Wembley.

"In these one-off games you hope the luck goes your way, but it didn't," the 45-year-old told BBC Wiltshire.

"We've now got to use this to propel us into the play-offs."

Swindon came back from two goals down to draw with Posh in the southern area final first leg at London Road, but were unable to hold on to the lead in their home game, as Alex Pritchard's goal was cancelled out by Britt Assombalonga.

The game went straight to penalties and, after both Massimo Luongo and Tijane Reis missed their kicks, Tommy Rowe stepped up to send Peterborough through.

"We've got a lot of disappointed young men in the changing room. My job now is to lift them, get their chins off the floor and get them ready for a tough game at Leyton Orient on Saturday," continued Cooper, who managed Posh during the 2009-10 season.

"We'll re-group on Thursday and get something in place and count how many fit bodies we've got for the weekend.

"The boys did really well tonight and I'm proud of them. I thought they played some really good football at times and we were unfortunate not to go through."

Swindon are four points off the play-offs going into Saturday's game against Orient, but are likely to be without joint top-scorer Nile Ranger for the rest of the season.

Cooper confirmed after Monday's game that the striker had suffered a grade three tear to his hamstring in their 0-0 draw with Colchester and is set to be out for 12 weeks.