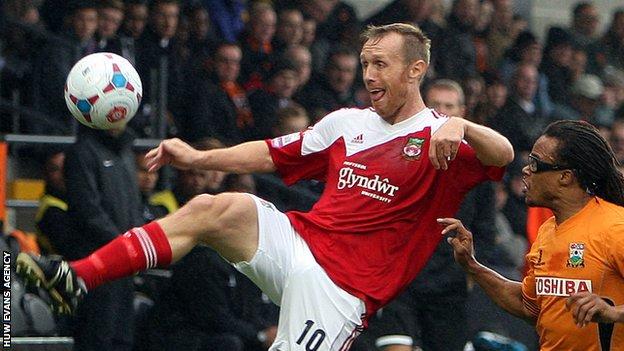 Although 12th in the table, the Dragons are just eight points behind fifth-placed Gateshead.

Ormerod, 37, believes Wrexham must take advantage of their games in hand starting away to second placed Cambridge United on Tuesday.

"We've got to keep our head up and keep going because it's 16 games to go," he said.

"There's always a team that comes from mid-table and has a run and gets into the play-offs.

"It's usually the team who ends up going up with the momentum."

Ormerod, has scored five goals this season for Wrexham, but he has not played for the club since being sent off against Halifax in January.

The former Southampton and Blackpool player's return from suspension was delayed on Saturday after the game at Braintree was postponed.

He says his spell on the sidelines maybe to Wrexham's benefit.

"At my age playing every game's not viably possible," said Ormerod.

"I've felt brighter and sharper and hopefully if I'm given a chance I can bring that to the team.

"It's a big run in and there's going to be a lot of teams who get tired and drop points I think.

"If we can try and be consistent and pick up points then who knows what could happen."