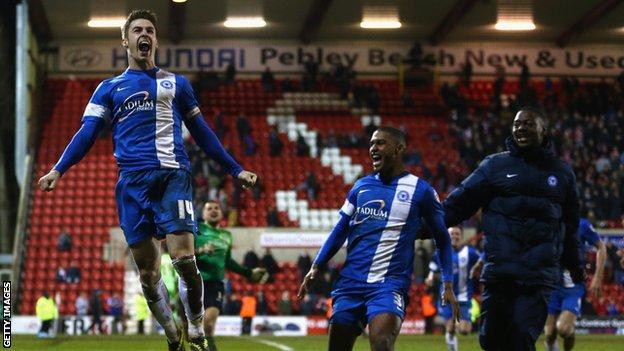 Peterborough United boss Darren Ferguson is hoping the Johnstone's Paint Trophy final will be one of two visits to Wembley this season.

in Monday's southern area final to book a trip to the national stadium.

And a League One play-off final at the same venue remains a possibility.

"It's a good night. We'll get that taste of Wembley and it will give us a great desire to get back there again," Ferguson told BBC Radio Cambridgeshire.

"It keeps everyone on their toes because I imagine everyone will want to play at Wembley.

"We can put it to bed now for five weeks. We have to make sure we keep this sort of commitment and consistency in the league and make sure we're in a good position come the final."

After a 2-2 draw in the first leg at London Road, Britt Assombalonga's header cancelled out Alex Pritchard's first-half goal in the return fixture in Wiltshire.

Tied at 3-3 on aggregate, penalties were needed to separate the sides and Tommy Rowe scored the decisive spot-kick.

Posh want an instant return to the Championship following relegation last season and will probably have to do it through the play-offs, with the Cambridgeshire side sixth in the table.

"It was one of the targets to win this tournament. We've given ourselves a chance. And the other target was to get back into the Championship," said Ferguson.

"It's a great night for everyone at the club. It is one that will definitely capture the imagination of the town - we'll take a lot of fans there.

"I thought we deserved to go through."