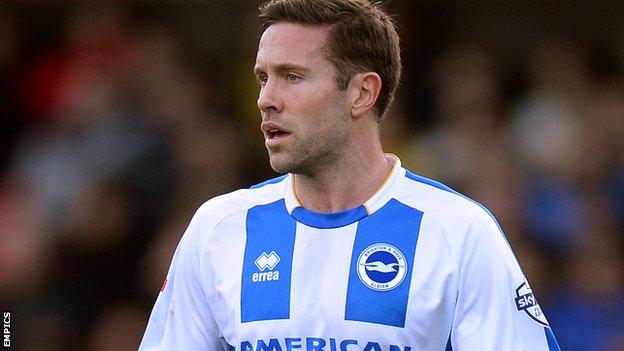 Brighton's Matthew Upson says it is "a shame" they will have to play their FA Cup replay against Hull just two days after a crucial Championship game.

"It is disappointing in a way because I love the FA Cup and want to give it everything we have," the former England international told BBC Sussex.

"[With] one day's rest in between it is difficult to commit to the Monday night game as well as we would want to."

The Seagulls drew 1-1 with Hull on Monday night, sending their fifth-round tie to a replay.

Brighton are currently seventh in the Championship table, four points off the play-off places but with a game in hand.

They host Wigan, who are three points below them in the table, on Saturday while Hull play Premier League relegation rivals Cardiff.

With top-flight sides prevented from playing domestic fixtures on the same night as Uefa's premier club tournament, the replay will be staged at the KC Stadium on Monday, 24 February.

"I am sure we will try and rest and recover and do as well as we can to perform on Monday. Hopefully we can pull something out."

Brighton went ahead at the Amex Stadium on Monday night through Leonardo Ulloa's first-half goal, but a late equaliser from Tigers striker Yannick Sagbo denied the Sussex club a place in the last eight for the first time since 1986.

"It was quite a good Cup tie in the end but whenever you concede late on like that you always feel a little disappointed," Upson added.

"I thought we did really well. They had their chances and hit the woodwork a couple of times but we held out and counter-attacked well.

"Our younger players did really well. I looked at them at the end and they were running on empty.

"It was one of those nights where we had to give everything to get a result and I thought we did that."