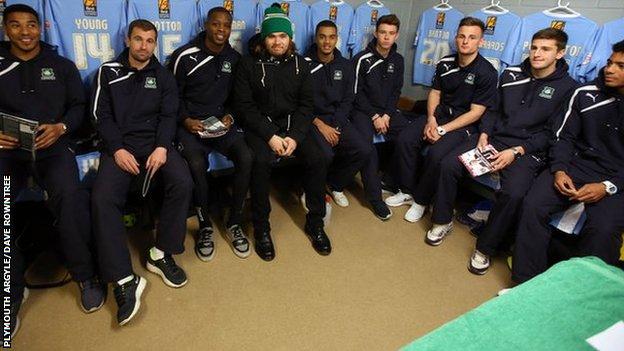 Wood - who played at the Brit Awards on Wednesday, where his band won best British breakthrough act - will replace the usual local newspaper journalists, injured players and managers who are called on to give their expert opinion on the game.

"Having grown up going to Argyle with my family since I was a young boy, I jumped at the chance to get involved with the team and the broadcasting legend that is Gordon Sparks," said Wood.

"This will be a dream come true."

Wood has experienced a remarkable 12 months with his band enjoying a number one album with their debut Bad Blood, as well as huge success around the world with their single Pompeii.

"I have been fortunate enough to have managers and players alongside me, but it will be a first to have someone from the world of entertainment - especially given the popularity of Bastille," said Sparks.

"Being an Argyle fan is a bonus. I'm sure "Woody" will fit in well."

Wood first attended a match at Home Park when he was five years old, and had a season ticket until he moved away to university in Leeds at 18, where he met his band-mates.

The success of the band has limited his visits this season, but he did attend the 2-0 win over Northampton earlier this month, and got to meet manager John Sheridan and pose for changing room photos with the team.

"He's a big fan and seems to know his stuff about Argyle and I think he'll do well. I'm a Bastille fan and I watched them at the Brit Awards and well done to them!"

Argyle are 14th in League Two but go into Saturday's game on the back of a 4-0 home defeat by York City.

Dagenham & Redbridge v Plymouth Argyle (kick-off 15:00 GMT) can be heard on Saturday, 22 February on BBC Radio Devon on 95.7 FM and DAB Digital radio, and to subscribers of Plymouth Argyle's website