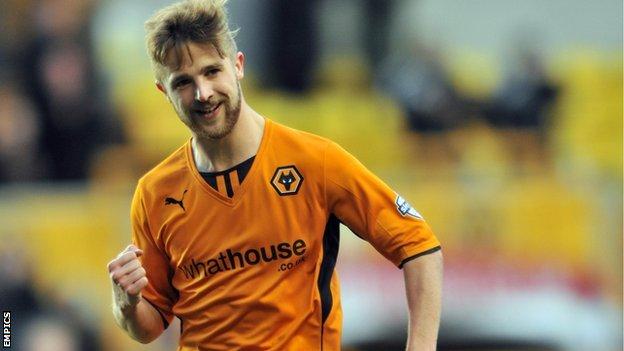 Wolves winger Michael Jacobs says the strength of the squad makes them think they can win every game they play.

Jacobs, 22, got both goals as second-placed Wolves beat Notts County to record their fifth straight win in League One and keep their bid for automatic promotion on track.

For the chances we create, we should really score more and I think, one day, some team will get a pasting

"When you look at the standard in the squad it's a joke (it's so good)," Jacobs told BBC WM.

"We're looking to win every game and that's what we'll try and do."

And he is currently part of a side that is on an excellent run of form that has lifted them to within two points of leaders Brentford - who they meet in a top-of-the-table clash at the weekend.

"It's strong and settled side at the moment," Jacobs said.

"But it's good that you've got boys there that are putting pressure on you for your place, so you know if you don't perform on a Saturday there's someone who will take your place. It's up to you to go and do well."

In their five successive victories, Wolves have scored 12 times and only conceded once - against Bristol City on 25 January.

And Jacobs acknowledges the part the defence are playing in the team's success.

Wolves giving nothing away

Wolves currently have the meanest defence in English league football, with only 20 goals conceded - one fewer than Chelsea.

The last league goal Wolves let in was a penalty by Sam Baldock for Bristol City on 25 January, meaning they have kept a clean sheet for 336 minutes (over five-and-a-half hours).

"It's a big effort from the boys at the back. If we can get the goals, then we're going to win games."

Wolves can go top of the table if they can win at Griffin Park and Jacobs is confident.

"We're both going into the game in decent form. We haven't lost in five and I think it'll be a fantastic game," he said.

"I think [whoever wins] will come down to who 'turns up' on the day, hopefully we can keep up the momentum.

"For the chances we create, we should really score more and I think one day some team will get a pasting.

"Hopefully we can keep the unbeaten run going, kick on and stay in that automatic promotion spot."