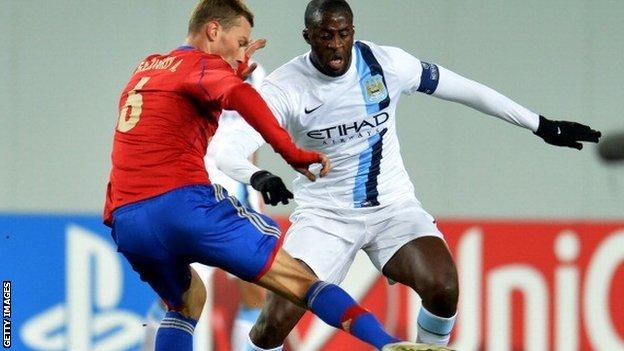 Russian side CSKA Moscow will have to play their next European home match behind closed doors after repeated racist behaviour by their supporters.

In November, the club had part of their ground shut after Manchester City midfielder Yaya Toure was subjected to racist chants during a game in October.

A statement from European football's governing body Uefa read: "Due to the fact that CSKA Moscow had previous records concerning the racist behaviour of their supporters, they have been ordered to play their next Uefa competition match as host club behind closed doors.

Ivory Coast midfielder Toure, 30, called for Uefa to close CSKA's Arena Khimki ground and said he was "furious" after suffering racist abuse during City's 2-1 win in Russia on 23 October.

After that offence, part of the Moscow stadium was shut for their Champions League game against Bayern Munich on 27 November.

However, it will now be completely closed for one game after the latest abuse, which took place in the Czech Republic during Viktoria Plzen's 2-1 win against CSKA on 10 December.

Russia will be hosting the World Cup in 2018, and Toure has suggested black players may boycott the competition.

Serbia's Under-21 team, previously in trouble over a match against England in 2012, and Cypriot club Apollon Limassol were handed partial stadium closures because of monkey chanting by their supporters at recent games.