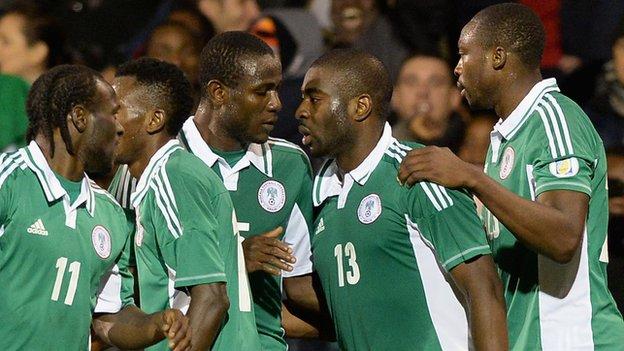 Dike, who was set to play against Mexico in a friendly on 5 March, wrote on Twitter that "surgery went well".

But it remains to be seen whether the 27-year-old will recover in time to play in the World Cup, which will be held in Brazil from 12 June to 13 July.

"We will surely miss him if he is not ready for the World Cup," Nigeria coach Stephen Keshi said on Wednesday.

"It is very sad. I can't believe this is happening to a player with such enthusiasm to play for Nigeria at the highest level.

"I won't think about bringing in a replacement for now until we get to the real facts of the matter."

Dike tore his Achilles tendon for the second time in three years during a Toronto FC training session on Monday and he wrote on Twitter that it was the "worst day of my life."

And the Nigerian Football Federation (NFF) said at the time that Dike's injury was a massive blow.

"It is such a shame that we have lost a player of his calibre for the friendly against Mexico and possibly the World Cup," NFF spokesman Ademola Olajire told BBC Sport.

"Bright Dike is a top professional and very humble guy. It is a blow for him personally, and for both his club Toronto FC and Nigeria."

Dike, who had recently returned from a torn anterior cruciate ligament (ACL) in his left knee, scored his second goal in as many starts for the Super Eagles in November's 2-2 friendly draw against Italy.

His first international goal against Catalonia in January was not enough to earn him a place in the 2013 African Cup of Nations squad.

But in November, Dike told BBC Sport that he would fight to force his way into Nigeria's squad for the World Cup and he had earned his chance to impress after being called up by Keshi for next month's friendly.