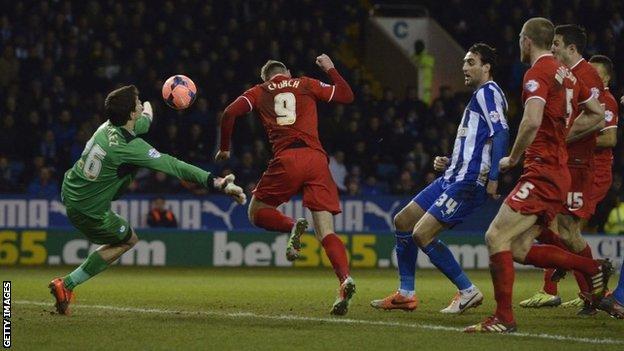 Wednesday and United met in an FA Cup semi-final at Wembley in 1993 and a potential Steel City derby had been anticipated since the draw was made.

But Church's header just after the hour mark ensured it will be Charlton who will play the League One Blades.

The fixture had been originally scheduled for 15 February, but was postponed because of a waterlogged pitch at Hillsborough.

Since then, relegation-battling Charlton have beaten Championship promotion hopefuls QPR and their confidence continued into this fifth-round tie.

"There will be a lot of disappointed fans in Sheffield. Wednesday did not show enough quality, they looked dangerous from set pieces but that is it.

"Charlton's gameplan was spot-on. They dug in when they had to and they looked like they had another gear they could kick into.

"The hype around Sheffield got to the Wednesday players. They never got settled and were chasing the game. Charlton deserved the win and I expect that they will have too much for Sheffield United too."

The visitors began positively and Swedish playmaker Astrit Ajdarevic served notice of Charlton's attacking intent with a shot which went just past the post after being set up by the lively Harriott.

Wednesday struggled to find their rhythm and were punished by Charlton, who took a deserved lead through Harriott in the 22nd minute after some neat build-up play.

Ajdarevic's initial shot was blocked and Harriott struck a sweet half-volley with his left foot into the roof of the net from just inside the penalty area.

The Addicks had another chance moments later when Wales striker Church seized on a loose ball, only to watch his deflected effort easily gathered by Damian Martinez in the Wednesday goal.

The hosts enjoyed a spell of pressure before half-time and midfielder Gary Gardner, on loan from Aston Villa, struck a first-time effort from 25 yards straight at Charlton goalkeeper Ben Hamer.

The hosts were given a let off of their own in first-half stoppage time when Church tried to break clear of the Wednesday defence and appeared to be held by Spanish defender Miguel Llera, but referee Mark Clattenburg ignored Charlton's appeals.

Charlton looked the more likely side to score immediately after the interval and Johnnie Jackson had Martinez, on loan from Arsenal, scrabbling to his left with a long-range attempt.

And it was another loanee in Best, who joined from Blackburn 10 days ago, that got the Owls on level terms just before the hour mark. Chris Maguire's free-kick was headed down by Llera and Best swept the ball home from close range.

Charlton regained the lead eight minutes later when Church took advantage of some sloppy Wednesday defending to head a Jackson free-kick past Martinez.

Wednesday substitute Atdhe Nuhiu saw a header hit the inside of the post, with Hamer reacting brilliantly to scramble the ball away from on the goal-line.

And Charlton boss Chris Powell was indebted to another late save from Hamer, who hurled himself at Maguire's deflected shot in injury time to turn the ball away from the top corner and deny Wednesday a replay.

"Our keeper Ben Hamer made some cracking saves but that's cup football.

"It's not been the greatest campaign for us in the league - that's an understatement - but this means a lot. That's two huge results in 72 hours. You savour these moments because there have been plenty of dark moments.

"We've got a real chance now of getting to the semi-finals, but it will be very tough against Sheffield United, who've had some really good results in the cup.

"Nigel (Clough) and his team will be thinking the same thing. They want to get to Wembley. A Football League side will be in the last four and we'll be trying our hardest to make it us."

"You can't play like we did in the first half and expect to win games of football.

"You're not going to win games of football playing like that. That's the worst 45 minutes of football I've been involved with at the club.

"The players have missed a great opportunity to look back over their careers and have on their CV a quarter-final of the FA Cup against your local rivals.

"I just couldn't see it coming. It was an FA Cup quarter-final at stake and it's a big disappointment."