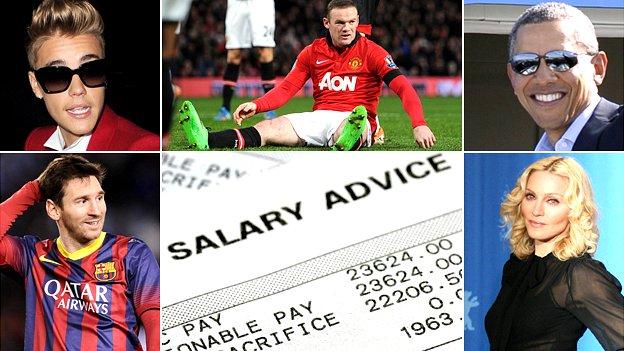 The deal will earn the 28-year-old Manchester United striker more than £70m over the next five-and-a-half years.

His weekly wage is more than president of the United States Barack Obama earns in a year, but boxer Floyd Mayweather's earnings knockout Rooney's.

BBC Sport breaks down what all the numbers mean...

What's in a wage?

£30,000 - The average weekly wage of a Premier League footballer in 2011-12, according to statistics compiled by Deloitte's sports business group.

£517 - The national average weekly wage of a person working in the United Kingdom. The amount the prime minister earns pales in comparison to what Rooney will pocket, with David Cameron collecting around £2,740 each week.

65 - The amount of weeks it would take Barack Obama, the president of the United States, to make what Rooney earns in just seven days, based on his £240,000-a-year wage.

1885 - The first year that it became possible to be paid to play football.

£4 - The maximum wage introduced by the Football League in 1901. Although it may look small by today's standards, at the time it was twice the average wage of a skilled tradesman.

£20 - The amount that was in Sir Tom Finney's final pay packet before the former Preston winger hung up his boots in 1960.

60 - The number of years it took until the maximum wage was abolished in 1961. Shortly after it was removed, former Fulham and England inside forward Johnny Haynes became the first £100-a-week player.

£1,200 - The amount goalkeeper Peter Shilton made each week in 1979 when he became the best-paid footballer in Britain by signing a new contract at Nottingham Forest.

£10,000 - The first player believed to earn a five-figure sum each week was Chris Sutton, when the striker joined Blackburn Rovers from Norwich City in 1994.

£100,000 - Sol Campbell left Tottenham for London rivals Arsenal in 2001, signing a contract that would see the former England defender become Britain's first footballer to earn a six-figure sum each week.

£200,000 - The estimated weekly wage Carlos Tevez earned at Manchester City when he joined the Blues in 2009.

Lamborghini Veneno - reputedly the world's most expensive supercar. Rooney would have to save up for a few months to amass the £2.7m required.

A year's salary would buy 208 terraced houses in Croxteth, Liverpool where he grew up.

A week's pay would buy 563 season tickets for family and friends at Old Trafford or 33,333 copies of Sir Alex Ferguson's autobiography.

£20.36m - Boxer Floyd Mayweather made the most in wages/winnings outside of the NFL, while British Formula 1 driver Lewis Hamilton took home £15.57m during the same period.