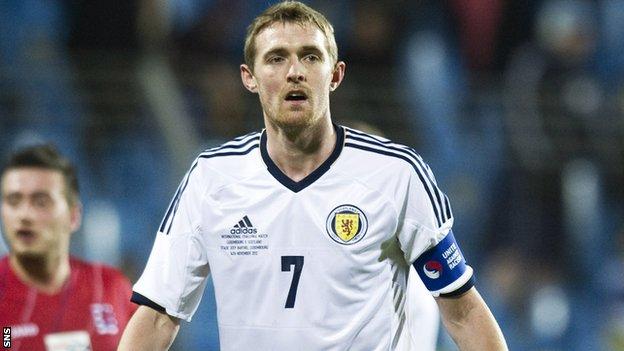 Manchester United's Darren Fletcher has been named in the Scotland squad for next month's friendly in Poland.

And he is expected to feature in the 5 March friendly in Warsaw for his first Scotland appearance since 2012.

Midfielder Fletcher, who has 61 caps, had spoken of his desire to return to international duty.

Fletcher was diagnosed with chronic bowel disease ulcerative colitis in 2011 but has returned after surgery.

"It was wonderful over the Christmas period to see him back playing football," Strachan said.

"We have got to take it a stage further. I've seen him playing and he has lost none of his enthusiasm, which he will never lose.

"To have him back in the squad is terrific."

This time last year, 19-year-old Robertson was playing for amateurs Queen's Park in the bottom tier of Scottish senior football.

But the defender has been hugely impressive in his first season at Tannadice.

He was capped for the first time at Under-21 level earlier this term and he was selected to train with the senior squad during the preparations for October's 2-0 win over Croatia.

Robertson is one of just four Scottish Premiership players in the squad, with no room for his United team-mate Gary Mackay-Steven or Kilmarnock striker Kris Boyd.

Bardsley last featured for Scotland in the 5-1 drubbing by the United States in May 2012 when Craig Levein was in charge and the defender has never played under Strachan.

"Bardsley's back in there and has been a terrific player for Sunderland in the last few months," said the Scotland boss.

"At this stage last season we never saw him. Now we've seen him and the more games he gets, the better he has become.

"He has been a big figure in Sunderland's improvement over the last few months."

The Scots will travel to Warsaw looking to build on the recent victory against Norway.

The Euro 2016 qualifying draw will be made on Sunday, with the Scots aiming to qualify for a major finals for the first time since 1998.