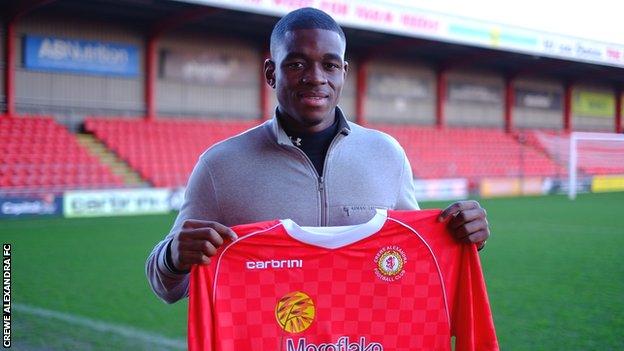 Crewe loan signing Uche Ikpeazu says he is confident he will score more goals if he is given the chance to start matches regularly.

I'm going to keep working hard, keep my feet on the ground and keep learning and progressing"

The 18-year-old recruit from Watford marked his full debut for the Alex by scoring twice in their 3-3 draw at Bradford City earlier this month.

"You have to believe in your ability," Ikpeazu told BBC Radio Stoke.

"I always believed that, if I start games, I can score goals. I've always known I can do well."

Ikpeazu began his career at Reading where his prolific form for their youth team helped him earn his first professional deal at Vicarage Road last summer.

He joined Crewe on loan until the end of the season in January and made his league debut as a substitute in their 2-1 home defeat by Leyton Orient.

Two more appearances from the bench followed before his memorable first start against the Bantams.

An ankle injury kept Ikpeazu out of Crewe's 3-1 loss to League One leaders Brentford last weekend, but the club hopes the young striker will be fit to return for the derby at Port Vale on Saturday.

"Since I've come here and the week's have gone on, I can see the team improving. It's good to be part of it," he added.

"I'm going to keep working hard, keep my feet on the ground and keep learning and progressing."