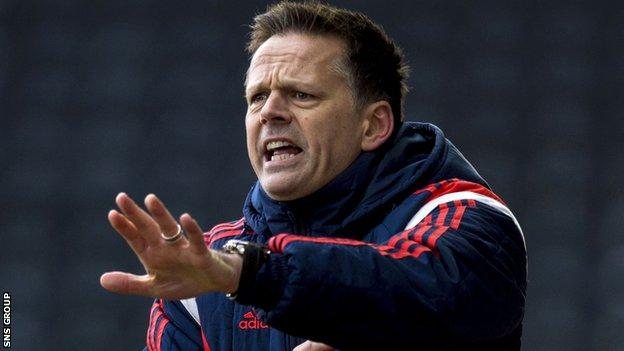 The 42-year-old Scotland U17s coach will replace Martyn Corrigan who left last month with the club languishing in seventh spot in League One.

"We received a number of high quality applications for the job," said club chairman Bill Darroch.

"The board felt that Scott had the right approach and the right mix of attributes that best meets the vision and aspirations of Stenhousemuir."

Booth, who will take over in March, was given the nod ahead of 33 other applications, with 11 candidates in total interviewed for the post.

"Scott has had an enviable career in football playing at the highest level for clubs including Aberdeen, Borussia Dortmund, FC Utrecht and others," continued Darroch.

"He has of course represented his country by winning 22 caps for Scotland. More recently, he has been working with the Scottish FA on youth development and as the coach for the Under-17s Scotland team.

"We believe that the attributes he brings as a former player with considerable professional playing experience, coupled with his passion for youth development, will be a perfect fit for Stenhousemuir."

Booth scored six international goals in 22 appearances between 1993 and 2001 and began coaching with the SFA in late 2011.

"I am delighted to have been appointed as manager of Stenhousemuir Football Club," he told the club website. "The first team squad has an excellent mix of youth and experience and I look forward to getting them on to the training pitch and working with them to be the best they can be as individual athletes, whilst developing a winning mentality as a team.

"Everyone in Scottish Football knows that Stenhousemuir is a modern, progressive club with big ideas on moving the game forward in Scotland. Be it their award winning community programme, or their new youth academy concept, Stenhousemuir is a club that often leads the way in developing the game.

"I am looking forward to being part of the club and doing my bit to take the club forward."